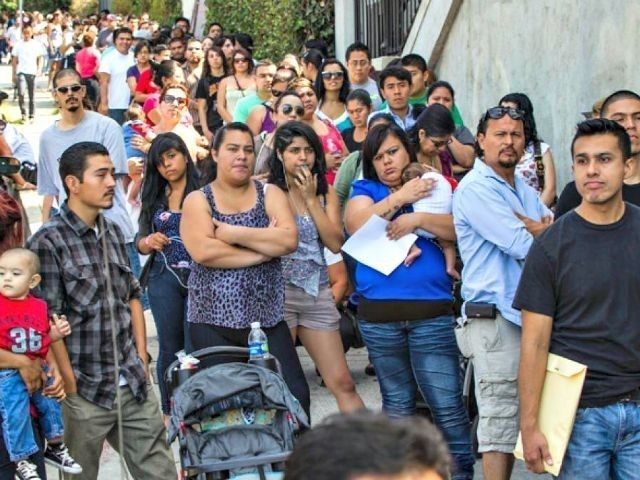 “Within 100 days, I’m going to send to the United States Congress a pathway to citizenship for over 11 million undocumented people,” Biden said. “And all of those so-called DREAMers, those DACA kids, they’re going to be immediately certified to be able to stay in this country and put on a path to citizenship.”

“We owe them, we owe them,” Biden said, referring to illegal aliens in the U.S.

Biden’s immigration plan would give 11 to 22 million illegal aliens a pathway to American citizenship. Biden’s plan also would free future border crossers into the country while they await immigration hearings, give taxpayer-funded healthcare to illegal aliens, and restart welfare-dependent legal immigration.

Providing taxpayer-funded healthcare to all illegal aliens would likely drive up costs for American taxpayers at an estimated $23 billion to $66 billion every year.

A longer lasting cost to American citizens of Biden’s amnesty would come in the form of crushed wages and labor market gains for America’s working and middle class, who would be instantly forced to compete against newly legalized foreign nationals under the Biden plan.

There are currently roughly 20 million unemployed and underemployed Americans, all of whom want full-time employment with competitive wages and good benefits. Economists have found that their job opportunities and wages can be easily diminished by high immigration levels.

One particular study by the Center for Immigration Studies’ Steven Camarota revealed that for every one percent increase in the immigrant portion of American workers’ occupation, their weekly wages are cut by perhaps 0.5 percent. This means the average native-born American worker today has his weekly wages reduced by potentially 8.75 percent, since more than 17 percent of the workforce is foreign-born.

The high immigration policy is a boon for giant corporations, real estate investors, Wall Street, university systems, and Big Agriculture that can cash in on an economy that offers low wages to a flooded U.S. labor market.