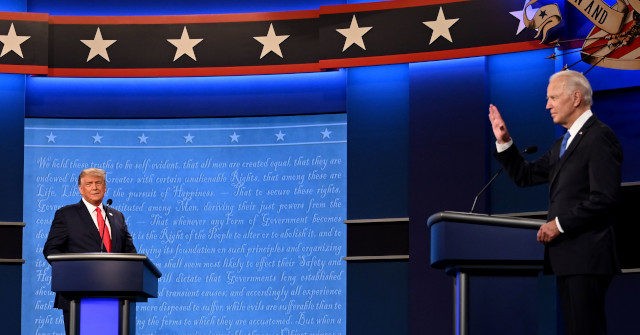 President Donald Trump and former Vice President Joe Biden will face off on Thursday evening in the final 2020 presidential debate in Nashville, Tennessee.

NBC’s Kristen Welker will moderate the debate at Belmont University.

9:39 PM: When asked if he would make China pay for the Coronavirus, Biden says he’ll make China play by the international rules.

9:38 PM: Welker asks how voters can be assured he isn’t doing anything wrong if he has a bank account in China. Trump says the bank account was opened in 2013 and says he was thinking about doing a deal in China like “millions of other people” and decided he was not going to do it.

Trump says unlike Biden, who was vice president and did business, decided to run for president. Trump says there is a “big difference.” Trump says Biden’s family is like a “vacuum cleaner,” following Biden around and sucking up money.

9:35 PM: Trump says he was put through a phony witch hunt for three years and it started before he was elected. Trump says Mueller and 18 angry Democrats spent $48 million and went through everything and found nothing wrong. Trump says if he spent $1 million on Joe, he’ll find a lot wrong. Trump claims Biden’s brother made money in Iraq and it all goes through Joe. Trump says Biden has houses everywhere and lives very well.

Biden says “nothing was unethical” when Welker presses him. Biden uses impeachment testimony to show that he did nothing wrong. Biden says the person who got in trouble in Ukraine was Trump, who Biden says tried to bribe officials to say bad things about Biden.

Biden says the only one who has made money from China is Trump. Biden claims there is “no basis” for Trump’s claims and Hunter/Ukraine.

9:26 PM: Debate turns to election interference and last night’s news about Iran/Russia. Biden says “they will pay a price” if he is elected because they are interfering with American sovereignty. Biden says Trump’s own national security adviser told him that Trump’s “buddy” Giuliani is being used as a “Russian pawn.” Biden says Russia doesn’t want him to be elected because he knows them and they know him. Biden says he doesn’t know why Trump doesn’t take on Putin even after bounties.

Trump claims Biden’s family got $3.5 million from Russia and says he never got any money from Russia.

Trump says that DNI Ratcliffe told him, re: Iran and Russia, “The one thing that’s common to both of them: they both want you to lose.” #debates2020

Trump takes the time to hit Biden over emails, saying he owes Americans an explanation about raking in money. Trump says Biden has to “clean it up” and talk to the America people.

“I have not taken a penny from any foreign source in my life,” Biden says before saying Trump has a secret bank account in China and does business in China.

Trump claims he has “pre-paid” tens of millions of dollars and claims his taxes are still under audit. Trump says he wants to release his taxes and his $750 was a filing fee. Trump claims he doesn’t make money from Russia and says he thinks he’s the “big man” who is scheduled to get 10 percent in the emails.

Trump, when pressed on taxes, claims the IRS treats him worse than the Tea Party.

9:23 PM: Welker asks who Trump is listening to after calling Dr. Fauci a “disaster.” Trump claims Fauci said “this is not going to a problem” and wonders if Fauci is a Democrat. Trump says he is  not knocking Fauci. Trump says nobody knew where it was coming from after Trump said it came from China.

Biden says think about what Trump knew in January and didn’t tell the American people. Biden says Trump went on record and said he knew how dangerous it was but i

Trump says Biden takes money from Wall Street and says “deals are made” when Biden raises money. Trump says he doesn’t need money because he has plenty of money. Trump seems irritated that his campaign wasted so many millions and Biden has a huge cash-on-hand advantage going into the home stretch of the campaign to the point his campaign can buy World Series ads.

Biden says his average contribution is $43.

9:18 PM: Welker presses Biden on shutdowns and what he would say to people who think the economic damage and societal costs are worse than the shutdowns.

Biden says he is going to “shut down the virus and not the country.” He says it was Trump’s “ineptitude” that caused the country to shut down. Biden says the concerns are real and that is why Trump should not have been in a “sand trap” at his golf course and negotiate with Pelosi.

Biden says he hasn’t ruled out more shutdowns if the spread gets worse.

Trump says all Biden does is talk about shutdowns and Democrats running states like Pennsylvania, New York, Michigan are shut down so tight they are dying. Trump says his son Barron tested positive and “it just went away.”

Biden says we can walk and chew gum at the same time. He says the country can open up with safety precautions, with testing and social-distancing guidelines. Biden tells teachers that not too many will die to “don’t worry about it.”

Trump says New York is a ghost town and says putting up plexiglass is expensive and not the answer.

Biden tells Trump to take a look at what New York has done to get the curve down. Biden says he is not looking at it in terms of blue states and red states like Trump. Biden says they are all Americans and we have to make sure everyone wears masks and businesses get the federal funds they need.

9:15 PM: Trump claims 99 percent of young people and 99 percent of people recover. He says we have to open up the nation or we won’t have a nation.

Biden says “people are learning to die with it” because of Trump’s incompetence. Biden rips Trump for not taking full responsibility.

Trump says he takes full responsibility and then blames China for sending the virus.

Biden rips Trump for saying it will go away by Easter and suggesting people inject disinfectants.

Trump suggests Biden called him “xenophobic” or “racist” for closing the border. Biden says it was in a different context.

9:10 PM: Welker presses Trump on whether he is guaranteeing a vaccine in weeks. Trump backs off the guarantee when pressed. Welker asks if his timeline is realistic and Trump claims his timeline will be “more accurate” than what the scientists have laid out.

Welker asks Biden about confidence in the vaccine. Biden says it has to be totally transparent. Biden says this is the same fellow who said this would go away by the spring and summer.

Biden predicts a “dark winter” and rips Trump for not having a clear plan.

Trump says he doesn’t think there will be a dark winter. Trump says Biden was “months behind” him and was a disaster with the H1N1 Swine Flu.

Biden says Trump is “xenophobic” not because he shut down travel from China weeks late. He rips Trump for praising China’s president Xi and saying how transparent Xi was. Biden says Trump did “virtually nothing” and then tells people not to worry after getting out of the hospital. Biden says there is not a serious scientist who says it will be over soon.

Trump says people can’t lock themselves in a basement like Biden. He says Biden probably has the ability to make money somehow, hinting that he will be attacking Biden later for Hunter’s laptop.

9:07 PM: Biden says 220,000 Americans are dead. Biden says anyone who is responsible for that many deaths “should not remain president of the United States of America.” He rips Trump for saying he is not responsible. Biden says there will be another 200,000 dead between now and the end of the year. Biden says 100,000 lives could be saved if people wore masks. He rips Trump for having no plan. Biden talks about rapid testing and national standards for how to open up schools and businesses so they can be safe. Biden says he will take care of this and end this and make sure we have a plan to combat the Coronavirus.

9:05 PM: First question is for Trump on the Coronavirus and how he would lead the next phase.

Trump says it’s a worldwide pandemic and claims the “excess mortality rate is way down.” He says “we’re fighting it and we’re fighting it hard.” He claims there were spikes in Florida, Texas, and Arizona and now they are gone. He claims there are spikes in some other places and they will be gone too. Trump says from personal experience he got better and he had something that they gave him– a therapeutic they call it–and he says he is immune now. He says more and more people are getting better and talks about goggles, masks, and ventilators. Trump says “it’s going away” and “we’re rounding the turn.” Trump claims a vaccine will come within weeks.

9:03 PM: Welker welcomes everyone to the debate as Trump and Biden take the stage. Biden gets on stage with his mask before taking it off as he gets behind his podium. No mask for Trump.

President Donald Trump and former Vice President Joe Biden are taking the stage. Trump walked in without a mask, Biden walked in with a mask and took it off. The nodded hello at each other. @WRCB

8:58 PM: Moderator Welker takes her seat, as the debate is about to begin.

“The president has repeatedly reserved his most below the belt attacks for particularly women journalists of color. We have seen this time and time again,” @CeciliaVega says. https://t.co/q0MD4RntYu #Debates2020 pic.twitter.com/JAKUwNhwgH

“She is scrupulously fair, she works incredibly hard, she is always prepared, she always knows what she is talking about, you cannot push her around…”
@Maddow on colleague and tonight’s debate moderator @kwelkernbc.

8:47 PM: Frank Fahrenkopf, the Commission’s co-chair, is now going over the ground rules for the debate.

Yup, John Daly and Kid Rock are in the audience for tonight’s debate.

UPDATE: The debate commission has removed the plexiglass barriers after their medical advisors (1) learned Trump and Biden tested negative for COVID today and (2) consulted w Dr. Fauci.
The medical team changed its recommendation, per CPD, and both campaigns have agreed. https://t.co/v2AmeQb64c