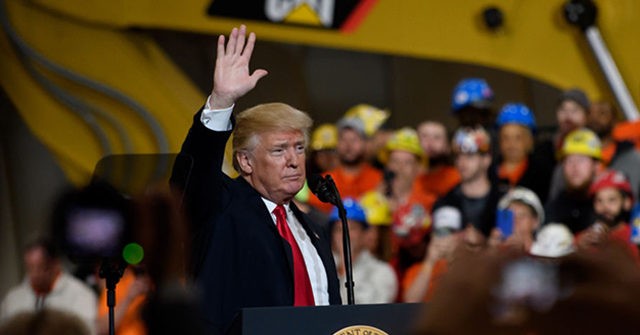 Former Delphi workers, who had their pensions slashed in the Obama-Biden administration’s auto bailout, are thanking President Trump for his order that seeks a solution in restoring the lost pensions.

In 2009, as part of the Obama-Biden administration’s taxpayer-funded bailout of General Motors (GM), the Pension Benefit Guaranty Corporation (PBGC) terminated the pension plans of about 20,0000 non-unionized Delphi workers. In some cases, workers had their pensions gutted by as much as 75 percent.

This week, Trump signed a memorandum that orders federal agencies to devise a plan on how to restore the Delphi workers’ slashed pensions over the next 90 days. Den Black with the Delphi Salaried Retirees Association (DSRA), which has been fighting for their pensions since the auto bailout, praised the decision.

“This is the best news since this nightmare began 11 years ago,” Black wrote in a statement:

The DSRA Board of Directors and members sincerely appreciate and are grateful to President Trump for his intervention to achieve closure of this ordeal. We are very thankful to Congressman [Mike] Turner for his ongoing leadership and initiative as well as to congressional representatives from both parties who in the past month signed a letter urging the President to intervene.

“This President is showing concern for all American workers,” Black said. “DSRA members never gave up. We appreciate his attention and help.”

Bruce Gump, the vice chairman of the DSRA, said Delphi retirees are offering their “encouragement and prayers for all involved to expedite a successful conclusion.”

“We played by the rules. The involuntary termination of our pensions was wrong,” Gump said. “It did not have to happen. This means so much to the future of these retirees, their families and communities in many states.”

Those involved with the pension-slashing scheme, such as Tim Geithner, Steven Rattner, and Ron Bloom, are currently pouring thousands of dollars into Democrat presidential candidate Joe Biden’s campaign.