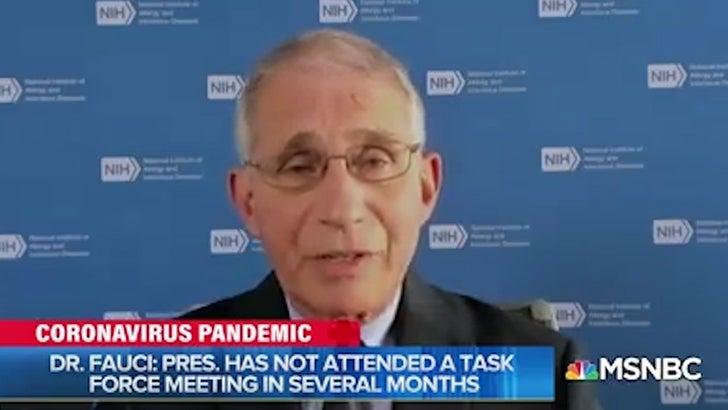 President Trump‘s talking like he and Dr. Anthony Fauci are still on friendly terms — despite each jabbing the other lately — but that’s news to Fauci, who says he has zero access to the Oval Office.

Dr. Fauci essentially said he’s been bumped, telling NBC’s Chuck Todd he no longer has the President’s ear — even though the coronavirus pandemic is ramping up again over most of the country.

The good doc says Trump is now listening more to Scott Atlas, the neuroradiologist and conservative think tank member the President added to the task force this summer.

Unlike what we’ve heard in recent weeks, Fauci did NOT take a shot at Trump for the shift — watch, he says it more matter-of-factly — but instead, he’s still sharing his knowledge with Vice President Mike Pence and the rest of the Coronavirus Task Force.

He added, Pence relays information to Trump, who hasn’t attended a task force meeting in several months. Worth noting … the country reported at least 75,049 new COVID cases Thursday, the second-highest daily total since the pandemic started.

Great time for a game of telephone.