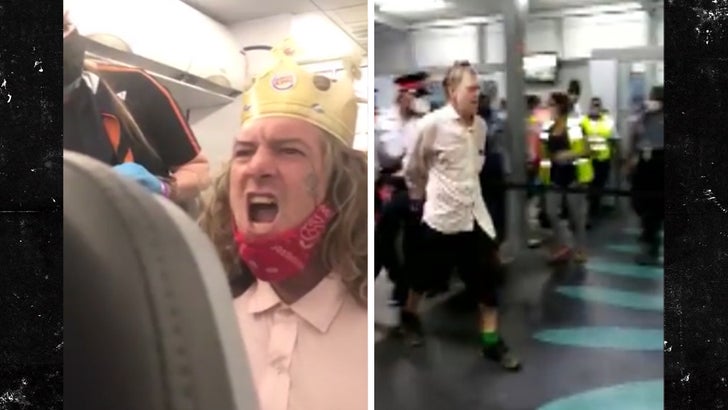 A JetBlue flight got turbulent before it even took off, as a man went on a racist tirade — while wearing a Burger King crown — and then got tossed off the flight.

The wild scene played out earlier this week in Jamaica, as the flight was preparing to depart from Kingston to JFK Airport. According to reports … the man initially got aggravated when he was told there was no more overhead space for his bag, and began cussing loudly as he walked to his seat.

Then he got into it with a nearby female passenger over seating assignments and then … total bedlam. In the video, he’s loudly accusing the woman of assaulting him, but he’s repeatedly hurling the n-word and expletives while he does it.

The disgusting rant went on so long, other passengers got enraged … and it escalated to violence. While he was being held back by several flight attendants, a male passenger charges and throws a punch. He wasn’t alone, as other passengers took physical shots at him during the chaos.

Eventually, Kingston police officers escorted the guy off the plane in handcuffs. It’s unclear if he, or any other passenger, was charged with a crime.

We’ve reached out to JetBlue and Kingston PD, but no word back yet.