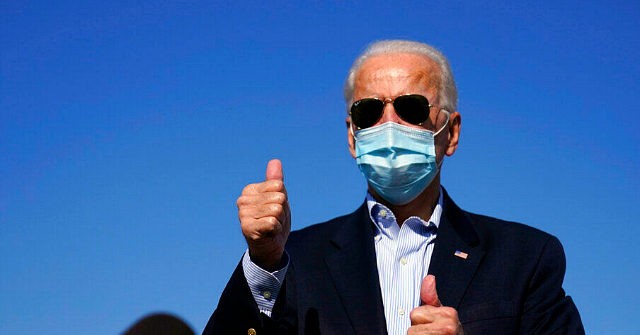 Democrat presidential candidate Joe Biden seemingly doubled down on his promise to eliminate the fossil fuel industry and, as a result, millions of American energy workers’ jobs with his climate change plan.

During Thursday night’s presidential debate, Biden committed to end the fossil fuel industry and replace it with “renewable energy over time.”

“By the way, I would transition from the oil industry,” Biden said.

Trump, in response, said Biden “is going to destroy the oil industry” and asked swing state voters in Pennsylvania and Ohio to remember the former vice president’s comments on Election Day.

“We have to move toward net-zero emissions,” Biden said. “The first place to do that by the year 2035 is in energy production. By 2050, totally.”

Following the debate, Biden doubled down on his climate change plan to eliminate America’s fossil fuel industry and the millions of middle-class jobs that Americans rely upon.

When questioned about his plan that will eliminate millions of Americans’ energy jobs, Biden said, “They’re not going to lose their jobs. And besides, they’re going … there are a lot more jobs that are going to be created in other alternatives.”

Biden’s climate change plan to end fossil fuels could eliminate five to ten million jobs for America’s middle-class energy workers — some of whom are in unions. At the least, Biden’s plan to ban oil and gas production on federal land could eliminate about one million American jobs by 2022.

As Breitbart News’s John Carney has reported, Biden’s plan to ban fracking could result in the elimination of more than 600,000 jobs in the state of Pennsylvania, alone.