A member of an anti-government extremist group has been charged in connection with shooting at a Minneapolis police precinct during riots sparked by the death of George Floyd, the Justice Department said Friday.

Ivan Harrison Hunter, 26, was arrested Wednesday in San Antonio, Texas, on suspicion of participating in a riot. Hunter is a self-professed member of the Boogaloo Bois, a loosely-connected group that espouses anti-government sentiment.

Boogaloo members use that term as slang for a second civil war and violent uprisings. 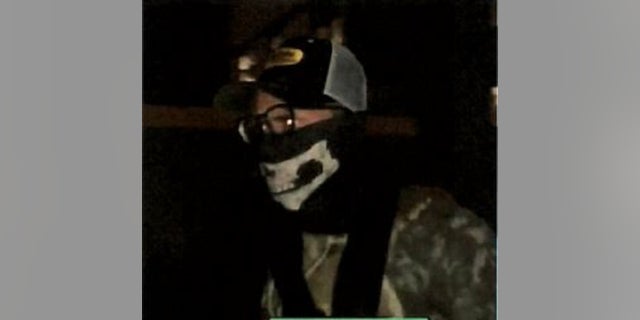 A man wearing a face covering was identified as Ivan Hunter, who is suspected of firing into a Minneapolis police precinct.  (Justice Department)

Authorities said Hunter traveled from Texas to Minneapolis between May 27 and May 28 with the intent of participating in a riot. Video footage reviewed by investigators appears to show a man, identified as Hunter, firing 13 rounds from an AK-47 style semiautomatic rifle into the Minneapolis Police Department’s Third Precinct, prosecutors said.

Looters were inside the building at the time and eventually set it ablaze. It was not clear if anyone was struck.

After the shooting, the gunman, who was wearing a skull mask partially covering his face, yelled “Justice for Floyd!”

A cooperating defendant identified the shooter as Hunter, according to a federal complaint released Friday. When he returned to Texas the day after the shooting, Hunter allegedly made statements on social media about his actions in Minneapolis, authorities said.

“I set fire to that precinct with the black community,” one post read, according to the complaint. In a follow-up post, he added: “Minneapolis third precinct.”

Another post reads: “My mom would call the fbi if she knew what I do and at the level I’m at w[ith] it,” prosecutors said Other posts show images of an AK-47.

During a June 3 protest in Austin tailed a pick-up truck with Hunter and two other men. The officers observed him loading six magazines for an AK-47 style rifle attached to his tactical vest while the two other men had AR-15 magazines.

The truck was stopped and officers found the semiautomatic rifles and two loaded pistols, the complaint said. Hunter denied knowing about the weapons but admitted to being the leader of the Boogaloo Bois in South Texas and that he was in Minneapolis at the time of the precinct fire, prosecutors said.

Police seized the weapons and a small amount of marijuana and released the men.

The next day, FBI agents in San Antonio learned of Hunter’s alleged connection to Boogaloo member Steven Carrillo, who is charged in the May 29 death of a Federal Protective Service officer in Oakland.