What’s wrong with Mitch McConnell’s hands? Probably nothing more than the thinning skin — and easy bruising — that comes with old age.

“I think it’s just a bruise — a solid good bruise,” she said. 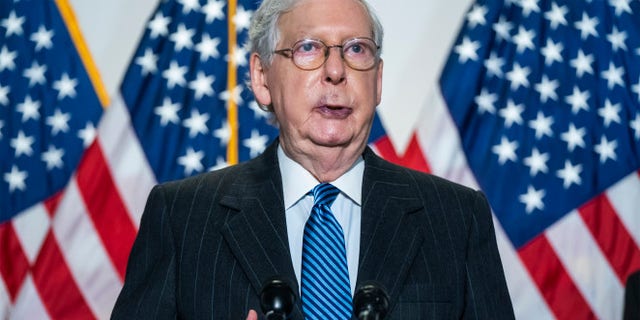 The senator may have senile purpura, a common skin condition from aging. (EPA)

Older skin loses its elasticity and its cushioning layer of collagen, doctors say.

That naturally occurring fragility of the skin can also be complicated by prior chronic sun exposure.

And if you’re taking any kind of blood thinner, even baby aspirin, bruising is even more likely.

“It’s really just from anything that creates some trauma that causes blood to leak out from the vessels under the skin,” Day said.

“It’s not a problem if it goes away. If you do bruise and the bruise does not go away, then you need to see a hematologist,” or blood doctor, she said.

There’s not much that can be done, said Dr. Jeremy Fenton, a dermatologist at Schweiger Dermatology Group in Manhattan and Long Beach.

“You can try some things, topical treatments that can build collagen and thicken the skin, such as retinoids, lactic acid lotions, but it’s going to be an uphill battle,” he said.

Fenton also agreed that the condition appears to be senile purpura — and he wondered further whether McConnell’s bruises resulted from a recent attempt to draw blood.

“If someone was trying to draw blood from him — especially if someone is on blood thinners — that can cause significant bruising,” he said.“But why does he have the bruising on his lips too? That wouldn’t be explained by someone drawing blood.”

Speculation on the Kentucky Republican’s bruised hands will only continue over the next week or so, dermatologists agree.

Before the purple bruises go away, they’ll turn several other colors, Day said.

“They’ll go from purple to green to yellow before fading away,” she said.