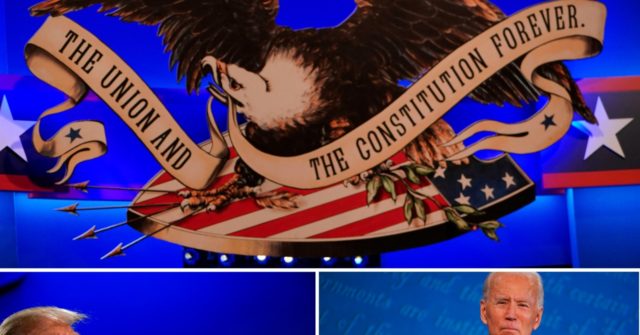 President Trump trounced Joe Biden during their final debate Thursday night in Tennessee. It wasn’t even close. Biden was looking at his watch because he couldn’t wait to get the hell out of the ring (I’m also told the debate took place in the middle of a Matlock marathon.) I was looking at my watch because I didn’t want it to end.

A quick word on the muting the microphones…

You put boundaries around a filmmaker like Michael Cimino, you get classics like Thunderbolt and Lightfoot and the Deer Hunter. You take away those boundaries, you get Heaven’s Gate.

You put boundaries around a Dennis Hopper, you get a classic like Easy Rider. You take away those boundaries, you get a disaster like The Last Movie.

Trump is an artist. He needs boundaries. Threatening to mute his microphone helped him and hurt Biden. It hurt Biden because interrupting (something he did a half dozen times in the first debate before Trump ever interrupted him) is the only debate tactic Biden has. Go back and watch his 2012 vice presidential debate with Paul Ryan.

Trump doesn’t  need to interrupt to win a debate. He’s a gifted debater. The threat to mute the microphones took away Biden’s only go-to move and  forced Trump to win on substance and facts.

One more observation before we get to China Joe’s lies.

Last night, Trump was forced to defend his record, to explain it… And because he has a very good record as president, he was able to.

Because Joe Biden has a terrible record, he was forced to lie… To tell 11 bald-faced whoppers, and here they are… All of Biden’s quotes below come directly from last night’s debate. [emphasis mine throughout]

FACT: Up to six million people lost their private health insurance plan after Obamacare became the law of the land, and the reason people lost their private health insurance is the most immoral things about Obamacare… Obamacare outlawed — actually made it illegal, for private insurance to offer private plans that did not live up to Obamacare’s lofty and ridiculous standards. Essentially, Obamacare demands we all, each and every one of us, pay for Cadillac plans that include all kinds of things we don’t need. So if, for instance, you had a reasonably priced catastrophic  plan with a high deductible — and these are perfect plans for the healthy — Obamacare outlawed them.

So many people lost their private plans that even the Obama-loving media were forced to declare Obama’s promise that “no one would lose their insurance or doctor” the Lie of the Year.

BIDEN: “We had a good relationship with Hitler before he in fact invaded Europe, the rest of Europe.”

FACT: This is such a ludicrous lie it’s hardly worth debunking. Franklin Roosevelt was president during Hitler’s rise. Roosevelt became president in 1932. Hitler became Germany’s chancellor in 1934. The president has sole authority over foreign policy, and at no time was Roosevelt fooled by Hitler. He certainly tried to stop and stay out of the European war, but Hitler’s aggression towards our allies and Hitler’s own hatred of America… This is such a stupid lie.

The reason Biden told this lie is what’s most illuminating. Biden is embarrassed that Trump has been able to do something Obama and Biden could not… Get North Korea to stop rattling its war sabers and firing off missiles.

Before Trump took office, North Korea (like ISIS) was on everyone’s mind. Thanks to Trump’s handling of North Korea (and ISIS), we hardly think about it anymore.

BIDEN:  “I have never said I oppose fracking.”

FACT: Biden spent the entire primary opposing fracking. There’s a ton of video of it. Here’s a taste:

BIDEN: “I talked about his xenophobia in a different context. It wasn’t about closing the border to Chinese coming to the United States.”

FACT: Here are Biden’s own tweets attacking the China travel ban as xenophobic:

We are in the midst of a crisis with the coronavirus. We need to lead the way with science — not Donald Trump’s record of hysteria, xenophobia, and fear-mongering. He is the worst possible person to lead our country through a global health emergency.

Stop the xenophobic fear-mongering. Be honest. Take responsibility. Do your job. https://t.co/nQ5aLVrpyb

BIDEN: “The catch and release, you know what he’s talking about there? If in fact, you had family, came across, they’re arrested. They, in fact, were given a date to show up for their hearing. They were released. And guess what, they showed up for the hearing. ”

FACT: Catch and release is America’s gobsmackingly stupid policy of catching illegal aliens in our country and then releasing them back into our country with a notice to show up for an asylum hearing. Yes, we release illegals into our own country after we have caught them. These illegals have already broken the law, but we still release them and tell them to come to a court proceeding, which they will almost certainly lose, which means they will be deported. In other words, they have no incentive to show up.

Through a number of maneuvers I don’t want to get bogged down in here, Trump has made amazing strides in putting an end to catch and release. Biden would reinstate it, and in order to justify it, he’s falsely claiming illegals dutifully show up for their asylum hearings. Well, they don’t. Close to 90 percent do not.

What’s more, it only makes sense that they don’t. Why would they? If they were legitimate asylum seekers, they would have asked for asylum in a legal fashion. These are illegals who snuck in and only ask for asylum after they’re caught.

BIDEN: “There is no evidence that when you raise the minimum wage, business has gone out of business. That is simply not true.”

FACT: Biden wants to more than double the federal minimum wage to $15 an hour, another disastrous one-size-fits-all idea. And now he’s claiming that forcing companies to double payroll expenses (this also increases taxes paid by employers) won’t hurt businesses. He further claims it never has.

The idea that mandating a raise in the minimum wage hurts businesses and workers is not even controversial. Everyone knows it does.

What Trump said is exactly right. This should be left to the states. A $15  minimum wage might make sense in blue states with their unnecessarily high cost of living, but South Dakota and Alabama sure don’t need it.

BIDEN: “Nothing was unethical. Here’s what the deal, with regard to Ukraine, we had this whole question about whether or not because he was on the board. I later learned of Burisma, a company that somehow, I had done something wrong. Yet, every single, solitary person when he was going through his impeachment testifying under oath who worked for him said I did my job impeccably. I carried out U.S. policy. Not one single solitary thing was out of line. Not a single thing. Number one.”

FACT: Again, we have the video tape proving this is a lie. A whole lot of people involved with impeachment were concerned with Hunter Biden looting Ukraine while his dad, the vice president, was the Obama administration’s point person there.

BIDEN: “And to the best of my knowledge, I don’t think the President said anything to Putin about [election meddling].”

FACT: Oh, isn’t China Joe, whose family received $3.5 million from the former mayor of Moscow, precious when he says to the “best of my knowledge.” He knows damn well Trump has told Putin to butt out — plenty of times.

BIDEN: “Look, there are 50 former National Intelligence folks who said that what this, he’s accusing me of is a Russian plan. They have said that this has all the characteristics– four– five former heads of the CIA, both parties, say what he’s saying is a bunch of garbage.”

FACT: The evidence that the Hunter Biden  emails exposing Joe Biden as the head of a crime family trading off his role as vice president to get rich continue to be verified  — and done so on-the-record, including pollster Frank Luntz.

Most importantly, neither Joe Biden nor Hunter Biden nor the Biden campaign have said the emails are not real.

BIDEN: “220,000 Americans dead. If you hear nothing else I say tonight, hear this. Anyone who’s responsible for not taking control — in fact, not saying, I take no responsibility, initially — anyone who is responsible for that many deaths should not remain as President of the United States of America.”

BIDEN:  “[H]e pokes his finger in the eye of all our friends, all of our allies.”

FACT: What in the world is Biden even talking about here? Our relationship with Israel has never been better. He’s convinced Mexico and other countries to make great strides in slowing down illegal immigration. Peace is breaking out all over the Middle East. I could go on and on…