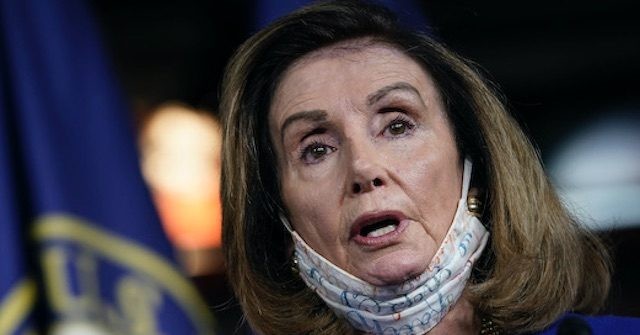 House Speaker Nancy Pelosi (D-CA) said Friday on MSNBC that President Donald Trump was “delusional” when he says America is turning the corner on the coronavirus pandemic.

Pelosi said, “In our legislation which I hope that the administration is just on the verge of accepting, they would, they must follow the science. They must allocate the resources in a way that, again, follows CDC guidelines to crush the virus. Everything else we’re talking about will just continue and perhaps worsen unless we crush the virus.”

She continued, “So follow the science, mask-wearing, testing, treatment, sanitation, get the job done that way. Up until now, they have resisted that. The biggest step forward I’m happy about in the negotiations is I think they’re about to embrace the science in a substantial way that, of course, also addresses the fact that more people in the minority community have died from this COVID-19 than in the white community. Children, black children, Hispanic children have five to eight times more chance of going to the hospital from COVID than a white child. So we have worked our way through this. Now, with some other differences, but we put pen to paper. We’re writing the bill, and hopefully, we’ll be able to resolve some of the other differences. We could do that before the election if the president wants to. I think he does. I think — I know we do. But we want this to be a bipartisan bill, the next bill to come to the floor, one that removes all doubt that it would become the law. ”

She added, “The president is delusional when he says we’ve turned the corner on this. We haven’t. We have miles to go.”