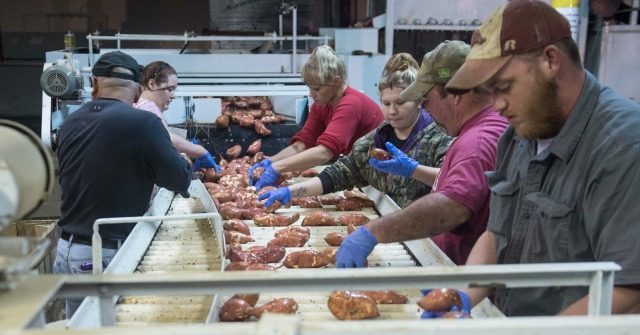 “The simple way to help workers to get pay raises is to mandate the use of the E-Verify system,” Cotton said in the October 23 interview, adding:

You’re not going to impose a wage mandate on anyone. You just have to tell every company in this nation that they will use the E-Verify system to verify the legal eligibility for applicant employees to work. That will automatically help raise wages for American workers, not for illegal aliens.

The E-Verify system allows hiring companies to quickly and easily verify job applicants’ legality, at no cost to the employer.

But instead of raising wages by the use of E-verify, Biden is promising to flood Americans’ labor market by legalizing the nation’s semi-hidden population of illegal immigrant workers, Cotton said.:

Joe Biden is saying, “I’m gonna send an amnesty bill to the Congress in my first hundred days without asking anything in return, without trying to secure our border, without enforcing immigration rules at workplaces against unscrupulous employers, without cracking down on visa fraud.”

He’s also talking about importing millions and millions of new workers, over and above the 15 million illegal aliens here who are going to get amnesty, and therefore the right to work. He is going to import millions of workers at a time when we have more than 10 million Americans who are still out of work because of the Wuhan coronavirus. So Joe Biden is going to bring in millions of new foreigners to compete with those Americans who are out of work at a time when we should be putting American workers first in line for American jobs. It just goes to show how radicalized the Democrats have become on immigration.

Trump’s 2020 plan offers broadly popular — but quite limited — pro-American restrictions on migration and visa workers. In many speeches, for example, Trump ignores the economic impact of blue-collar and white-collar migration on Americans while stressing issues of crime, outsiders, diseases, or welfare, even though his low-immigration policies have been a popular boon to Americans.

Open-ended legal migration is praised by business and progressives partly because migrants’ arrival helps to transfer wealth from wage-earners to stockholders.

Migration moves money from employees to employers, from families to investors, from young to old, from homebuyers to real estate investors, and from the central states to the coastal states.