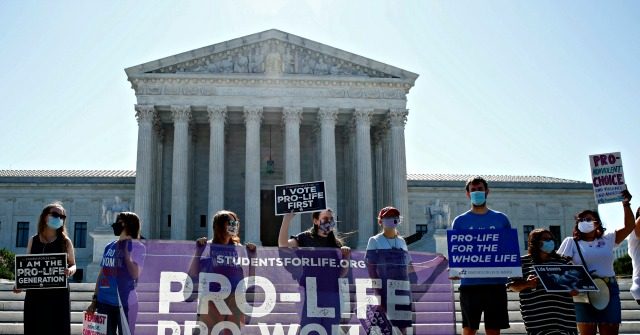 The Trump administration led a 32-nation signing ceremony of a declaration that affirms there is no international right to abortion.

On Thursday, Secretary of State Mike Pompeo and Secretary of Health & Human Services Alex Azar co-hosted the virtual signing of the Geneva Consensus Declaration along with the governments of Brazil, Egypt, Hungary, Indonesia, and Uganda.

The declaration serves as a rebuke to the pro-abortion rights U.N. and World Health Organization (W.H.O.).

It states the nations join to promote women’s health as well as the “strength of the family and of a successful and flourishing society.” The governments also affirm “the essential priority of protecting the right to life.”

The nations that signed onto the declaration, which represent 1.6 billion people, also “reaffirm ‘all are equal before the law,’” and that “human rights of women are an inalienable, integral, and indivisible part of all human rights and fundamental freedoms.”

The governments declare “the inherent ‘dignity and worth of the human person,’ that ‘every human being has the inherent right to life,’ and the commitment ‘to enable women to go safely through pregnancy and childbirth and provide couples with the best chance of having a healthy infant.’”

The declaration emphasizes that “in no case should abortion be promoted as a method of family planning,” and that “the family is the natural and fundamental group unit of society and is entitled to protection by society and the State.”

The governments also assert that “women and girls must enjoy equal access to quality education, economic resources, and political participation,” as well as equal access to employment and decision-making.

“This is the first time these nations have committed to working together – despite cultural and religious differences – to ensure that human rights are extended to every member of the human family,” Father Frank Pavone, national director of Priests for Life, observed in a statement.

Susan B. Anthony List President Marjorie Dannenfelser praised the commitment of the Trump administration to the right to life:

Abortion is not health care. Sovereign nations have the right to protect their most vulnerable citizens, including the unborn, and to be free from bullying and coercive efforts to expand abortion on demand. From day one, President Trump and his administration have worked to stop the exportation of abortion, making respect for life the official policy of the United States in our international relations. We join our friends around the world in celebrating this landmark declaration, which builds on the Trump administration’s commitment to promote authentic human rights and dignity at every turn.

Additionally, seven member nations of the Organization of American States (OAS) signed a joint statement that affirms “every human being has the right to life, liberty and the security of his person,” and that it is the sovereign right of nations to make their own laws protecting life from the moment of conception.

“President Trump is standing for the defense of life in the Americas like no other president in history,” Alfonso Aguilar, president of the Latino Partnership for Conservative Principles, said, and added:

At a time when the Inter-American Commission and Court of Human Rights, which ironically are supposed to promote and defend human rights in the region, are actively seeking to undermine the fundamental human rights of the unborn, the United States, acting in unison with eight other OAS member states, is raising its voice to say in no uncertain terms that the Organization of American States and its affiliate bodies must respect the sovereignty of the counties of the Western Hemisphere to enact legislation that protects life from the moment of conception.

In August 2019, Pompeo and Azar sent a joint letter inviting other world leaders to stand with the United States in defending life against the efforts within the U.N. to create an international right to abortion on demand.

In their letter, Pompeo and Azar asked other governments to join with the U.S. “in ensuring that every sovereign state has the ability to determine the best way to protect the unborn and defend the family as the foundational unit of society vital to children thriving and leading healthy lives.”

“[P]lease encourage other countries in your region to join this growing coalition to push back against harmful efforts to interpret long-standing international instruments as requiring anti-family and pro-abortion policies,” Pompeo and Azar wrote to the other world leaders, “and to promote proactively positions that will protect families and strengthen the health of all people.”