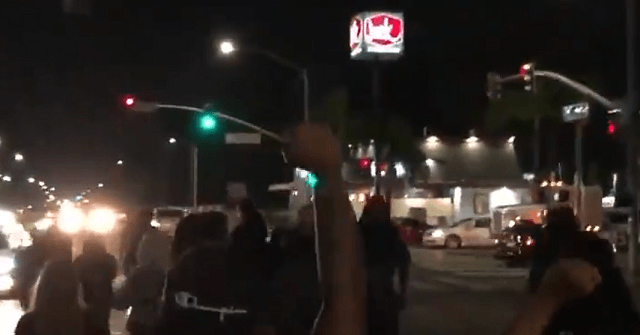 An anti-police protester attacked a woman in her car while another man scratched her car with a key, according to a video posted on Twitter. In a second video, another vehicle is keyed as the driver attempts to pull away from the protesters in San Bernardino, California.

Protesters blocked traffic in San Bernardino and vandalized cars caught up in the roadway blockage. A video tweeted by journalist Drew Hernandez shows one of the protesters punching a woman in the face. A second man reaches out and keys the side of her car.

In a second video, Hernandes shows a man keying another car as the driver attempts to flee the protest area.

BLM rioters are standing in the street in San Bernadino, CA and keying people’s cars as they drive by. You know, to protest against “racism, or something. pic.twitter.com/hLTd3qNou5

The sound of the key scratching the side of the car can be heard as the driver pulls away.

Protesters came out after news broke of a San Bernardino police officer shooting an armed black man. Police officials reacted quickly and released video of the shooting that clearly shows the man fighting with the police officer and then pulling a gun from his wasteband.

The officer shoots in self-defense as the man begins to turn with the gun visible in his hand toward the officer.

SAN BERNARDINO: After a man was resisting arrest and fighting a police officer

The suspect then reaches for a weapon while fighting the officer

The officer then sees this and takes the criminal down

A handgun was retrieved from the scene

Angry BLM protesters gather in the street in San Bernardino, Cal. after a black man was shot dead last night by a cop. It was caught on video & shows him resisting arrest, fighting the cop & grabbing a pistol from his waistband. Video by @livesmattershow pic.twitter.com/J15Uu6yvnG

Speaking to a group gathered outside the store where the shooting took place, one man told onlookers that police are not from the community. He said they come from “KKK enclaves” in the suburbs.

Angry BLM protesters gather in the street in San Bernardino, Cal. after a black man was shot dead last night by a cop. It was caught on video & shows him resisting arrest, fighting the cop & grabbing a pistol from his waistband. Video by @livesmattershow pic.twitter.com/J15Uu6yvnG