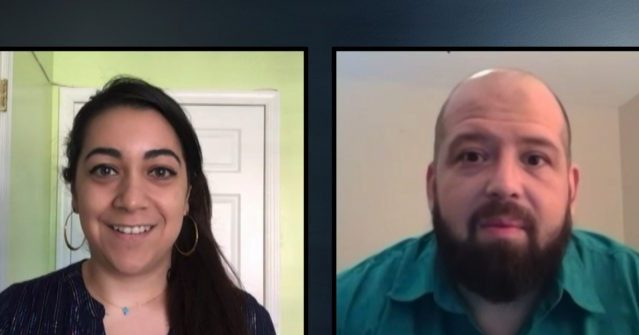 In anticipation of November’s presidential election and in light of growing concern among Democrats regarding their ability to court the Hispanic vote, Breitbart News border reporter Ildefonso Ortiz and international news editor Frances Martel discussed the increasing popularity of conservative ideology within their community.

In a conversation in their native tongue, Spanish, the two noted the growing recognition among Latinos that the core of their culture and identity is fundamentally incompatible with the goals and values of the radical left. Ortiz, who is Mexican American, noted that Mexican culture and values are “more conservative than what Democrats present” and that the Democrat approach to molding Hispanic identity to the party’s benefit is “the definition of racism.”

“For a long time, the Democrat Party has tried to come across as giving the image that they are the party of immigrants. Of course, what we have seen over time is that it is a lie,” Ortiz said. “If we look at Mexican culture, we are really more conservative. The ideology of a Mexican is more conservative than what Democrats present.”

“Always, when they reach the presidency or get power, they forget about Hispanics. It’s something that, sadly, has not changed,” he added, “and people are starting to awaken to that strategy.”

Martel, who is Cuban American, argued that this growing awakening has led to tensions between Democrat elites and grassroots conservatives, which peaked this year with a bizarre left-wing attempt to boycott Goya foods, a staple in Hispanic households.

“What the Democrat Party has tried to do to solidarize with Hispanics this year has been tragic. They tried to boycott Goya, which is the most famous Hispanic food brand in the United States,” Martel said. “We all have memories of cooking Goya products with our grandmothers, and they told us that we can’t use Goya anymore. They tried to change our language. They told us that Spanish is transphobic and that we are no longer Hispanics; we’re ‘Latinx.’ I dont know what that is. It’s spelled ‘Latin’ with an x. It’s unpronounceable in Spanish.”

Martel concluded that she felt the left was attempting to “change the soul of Hispanic identity,” which is family-oriented, religious, and focused on hard work and self-improvement.

“What you are describing is the definition of the white supremacy of the Democrat Party, where they impose their point of view on us Latinos,” Ortiz replied. “They are telling us what we can eat, what we can’t eat, how we should talk; that is the definition of racism. They want to dominate us without us noticing, that we think that they are doing something good for us … almost giving the impression that, to them, Latinos are an inferior race.”