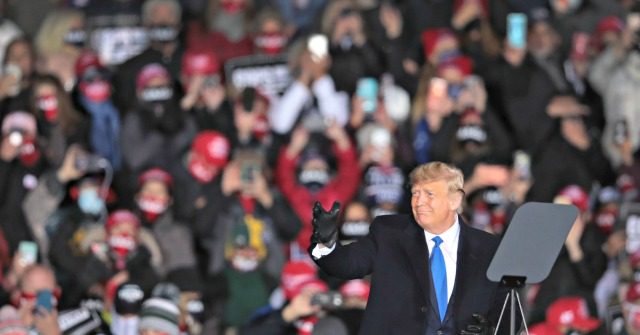 President Donald Trump declared that his political movement was stronger than ever at a campaign rally in Wisconsin Saturday.

The president spoke at his third rally of the day after voting in Florida Saturday morning and doing a rally in North Carolina and Ohio before ending up in Wisconsin at a late night rally.

Trump spoke about ramping up his campaign rally schedule – that he wanted to do five events in just two days.

“Something is going on, and they see it,” Trump said, referring to a press conference he had with reporters traveling with him on the campaign trail.

“I told you this was going to happen,” he recalled telling reporters. “You don’t remember four years ago? This is going to be a bigger version. We’re going to win by a lot more.”

The president urged his supporters to turn out in force and deliver a resounding defeat for Biden and the radical left. He said:

The people of Wisconsin must stop these anti-American radicals by giving Joe Biden a thundering defeat at the ballot box. Now it’s not Biden. Just say it, look, it’s not Biden. You know that it’s the people that totally control him.”

“That party’s a mess, but their numbers are dropping like a rock, and mine are going up,” he said.

Trump said he would continue campaigning hard until Election Day.