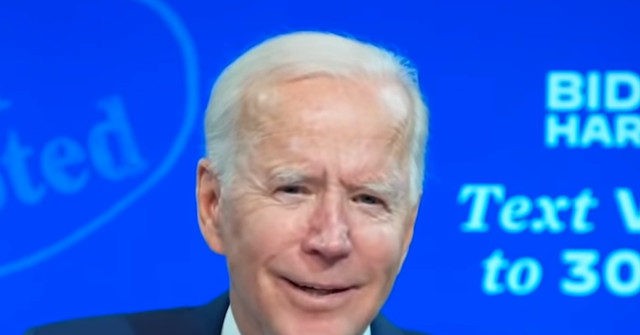 Joe Biden said his campaign has assembled the “most extensive and inclusive voter fraud organization in the history of American politics” in a podcast published Saturday — an unfortunate slip of the tongue, as the presidential election will likely see major legal battles over the legitimacy of millions of ballots cast via mass-mail voting.

Speaking to former Barack Obama staffers on Pod Save America, host Dan Pfeiffer asked Biden what his message was to people who have not yet voted.

DAN PFEIFFER: One final question for you, Mr. Vice President. This interview is gonna come out tomorrow, which is early vote day. And so I’m gonna ask you a two-part question, which is what I think President Obama used to call “pulling a Chuck Todd.” [Laughter] Part one: What’s your message to the folks who have not yet voted or do not yet have a plan to vote. And part two, for the 50 million Americans who’ve already voted, what can they do over the last ten days to help make sure that you’re the next President of the United States?

JOE BIDEN: Well, first of all, you know, uh, what really rankles, uh, my opponent is I say that, uh, the thing that bothers him most is he’s not a patch on Barack’s jeans. I mean, you know Barack was one hell of a president, and I tell you what, man, what an honor it was — I think you guys believe it, too — to serve with him. I mean, incredible honor. And, uh, I’m not being solicitous. I really mean that. Um, he had more integrity in his little finger than most people have in their whole body and he had a backbone like a ramrod. Has one.

Secondly, we’re in a situation where we have put together — and you’d [sic] guys, did it for our, the president Obama’s administration, before this — we have put together, I think, the most extensive and and inclusive voter fraud organization in the history of American politics. What the president is trying to do is discourage people from voting by implying their vote won’t be counted, it can’t be counted, we’re gonna challenge it, and all these things. If enough people vote, it’s gonna overwhelm the system. You see what’s happening now. You guys know it as well as I do. You see the long, long lines in early voting. You see the millions of people who have already cast a ballot.

And so, don’t be intimidated. If, in fact, you have any, any, problem, go to — and I don’t have the number, but it’s 833-DEMVOTE, the letters D-E-M-V-O-T-E. Call that number. We have over a thousand lawyers. Over a thousand of them’ll answer the phone. If you think there’s any challenge to your voting, go to 833-DEMVOTE. Dial those letters on your phone. That will get you the assistance that we have already put in place.

Because look, you know, as John Lewis said before he passed away, it’s really you have a sacred right and it’s a sacred obligation to vote. Particularly young people. You’re the ones who, if 18-24, 25 years old vote in the same percentage that the rest of the population voted in in 2016, you know what would happen? We would have had 5.2 million more people voting. You can own the election. You can own the outcome. It really, really, really, really, really matters. And make the case to your friends. Make your case to friends that they can’t complain if they don’t vote. And it’s gonna be counted. It’s going to be counted.

And because I think the American people are going to show up, Dan, in such large numbers, there’s gonna be no way to avoid the outcome. And look what he’s done from the beginning. Done everything to try to discourage you, saying he’s not sure he’ll accept the results. He’s not sure what he’ll do. I guarantee you he’ll accept the results and he’ll be out in — [chuckles] — there’s no one gonna stick with him. You know, uh, you know, he’s the only president I know that six of his generals who’ve worked directly for him have said he’s unfit to be president, commander-in-chief. So I’m not worried about any, any coup here. You know, not that he’s saying there’s gonna be a coup.

But it’s, look, think about everything that’s been said. When I said about three months ago, “I think he’s gonna, he’s gonna suggest he may not step down, he may not accept the outcome of the vote,” people said, “oh, there goes Biden.” What’d he do? Two weeks later. It’s all designed to try to keep people from voting. So those that have voted, you know how long it took you, how you did it, what you did.

Go to particularly — if you have, you know, grandparents or older folks in your neighborhood who you know. And they have a, they have an absentee ballot. Show them it matters how they fill it out. It’s complicated, some of it. They haven’t made it easier. For people. In many states. And by the way, wat’s [sic] why we challenged — it may not hold up in Pennsylvania, with [sic] the Supreme Court were to change it, but — now they’ve allowed the county, if it’s postmarked, is [sic] can be counted for all the way for next several days, which it should be.

Well, you have in Texas the governor having these drop boxes, one in a county. Some of the counties are as big as my state almost, literally. And the idea there’s one drop box? And so, we’re gonna be, we’re gonna have enough people out there policing it, watching it, making sure it [sic] — do not be intimidated. But go out and help those who you know are gonna have physically, physical difficulty getting to polling place [sic], or may need help on how to get done what they need to get done to vote. I Will Vote dot com. Will tell you exactly where you can vote, where you live, what circumstances are available to you, and vote early. Vote early.

But I, and I, by the way, I particularly at, one of the things we did — you know, you guys’ generation stepped up. One of the things you may recall that I started arguing for is the need for significantly more young poll workers. Well, thousands of you have showed up. Thousands of you showed up. Because of COVID, older people’ve, traditionally are the poll watchers and make sure everything’s squared away, they’re afraid to show up because they’re dying. Or they’re getting COVID, many of them. They’re worried about it. They’ve seen what’s happening to their friends.

And so what’s happening is, this election is a generational election. This is, this is this generation’s opportunity — not a joke — to take back our democracy. It literally, literally — my word as a Biden is at stake. Our democracy is at stake. And you know, we all, I, and I have to admit to you. You know, I always heard that. I was a history of political science major in college. I’ve been involved in public life my whole adult life. But I never really believed it — that it was really, you know, every generation has to earn it. Well, guess what. It’s in jeopardy, man. It’s in jeopardy. Do not be intimated. Do not be intimated. And whether you vote for me or against me, vote. Vote. Vote. There’s not a single thing we can’t do when the American people stand together. And that’s not hyperbole. I mean it. There’s nothing. Nothing beyond our capability.

JON LOVETT: On that note, Vice President Joe Biden, thank you so much for your time. Good luck in the last ten days, and let’s go win this thing.

BIDEN: I’m gonna give it hell. Thank you very much. And by the way, you guys have such an enormous following. Not only with my children, my grown children, but my five grandchildren who range in age from 27 to, uh, to 14. Er, no, that’s not true. Sixteen. She’d be very upset I said 14. Uh, but all kidding aside, you really, you’re really reaching out, and, uh, you touch because you talk, you know, you talk plainly to people. And it matters. That really matters. Anyway. Thanks. Looking forward to seeing you guys in person.

Biden did not correct himself after saying “voter fraud organization,” nor did the hosts attempt to correct or clarify his statement.