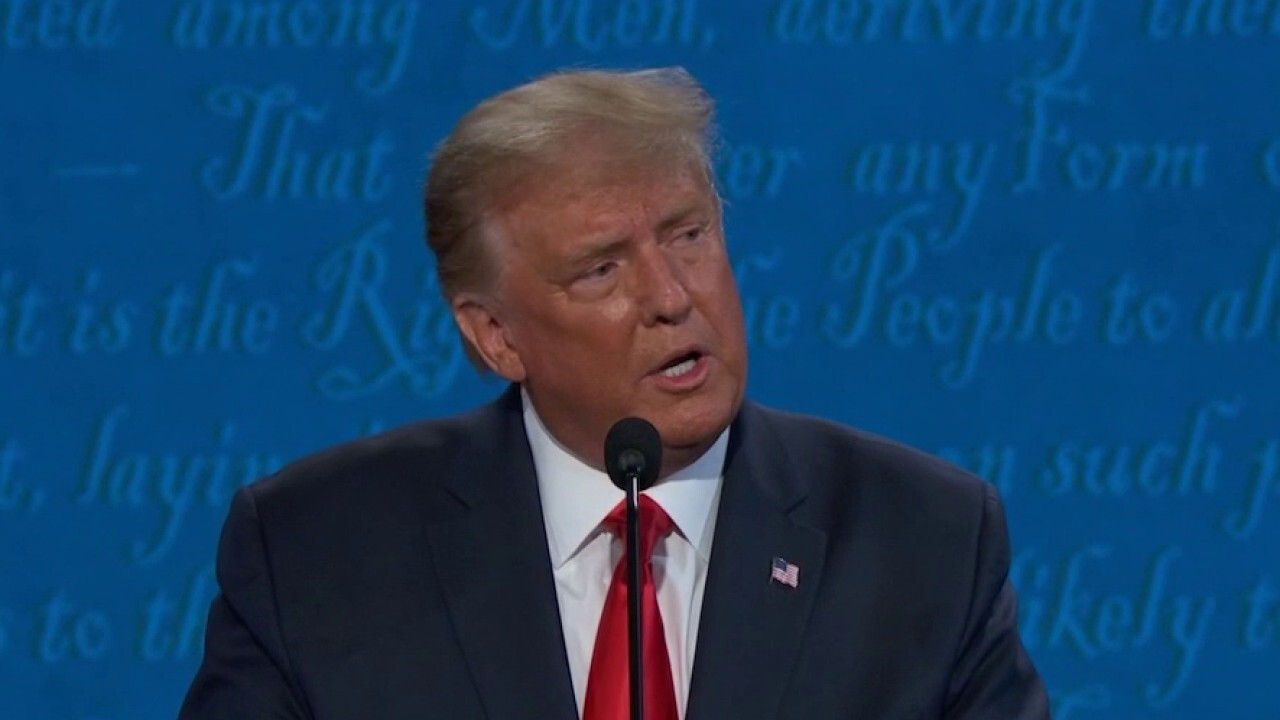 President Trump had a great closing debate Thursday night. His tone was presidential. His discipline made the debate feel far more substantive and appropriate than his first debate with former Vice President Joe Biden.

By contrast, four days of hiding in the basement seemed to drain Biden of some of his energy. Late in the debate, Biden was tired enough he made a clear statement attacking the oil and gas industry, which he would never have made if he were fresh.

President Trump’s dominance in this debate was captured by pollster Frank Luntz in a report on the key words his focus group used to describe the two candidates after it was over.

According to Luntz, his group described President Trump as controlled, reserved, poised, con artist, and surprisingly presidential. (The mainstream media will focus on “con artist” and ignore the others, I’m sure).

Yet, after the first debate four of those words were more than any Trump adviser could have hoped for. By contrast Luntz’s group described Biden as vague, unspecific, elusive, defensive and grandfatherly.

Somehow, I don’t think vague, elusive, defensive and grandfatherly are winning terms (I dropped unspecific because it is not as harsh).

There will be a temptation by some supporters of President Trump to relax now that the debate is over, since the president apparently did so well. This would be a huge mistake. This campaign will not be over until the last vote is counted. That means some communities will have to maintain a campaign focus through possible recounts.

This debate is not the end of the campaign. There is still more than a week left in the vote- attracting phase alone.

Remember that Trump’s last rally in 2016 was early in the morning of Election Day in Grand Rapids, Mich. The news coverage of that rally and the human energy of the excited audience may have been a significant part of the narrow margin by which he carried the state.

Trump and his campaign will face an onslaught of attack ads and the continuing hostility of 93 percent of the news media as we head to Election Day. He must maintain the momentum and stay on offense for this entire time.

The key is to simplify the campaign message into three simple components: 70 percent should focus on the economy, 20 percent on Biden’s character and corruption, and 10 percent on the road ahead to successfully defeat COVID-19.

It is important to have the discipline to focus 70 percent of the remaining campaign on the economy, which is the president’s greatest strength. There is every reason to believe that with his leadership America will experience a V-shaped recovery from the coronavirus pandemic.

By contrast, Vice President Biden was part of an administration that had the slowest recovery since the Great Depression.

However, as the president noted in the debate Thursday night, there is more to the question of economic recovery than simply macro policies.

President Trump should challenge the governors of the most tightly locked down states to reopen and allow people to go back to work. He should champion saving small businesses from business-killing governors such as Andrew Cuomo of New York, Philip Murphy of New Jersey, Stephen Sisolak of Nevada, Gavin Newsom of California, and Gretchen Whitmer of Michigan.

As the champion of having courage and persistence and getting America back to productivity and prosperity, President Trump should also emphasize the cost of keeping schools closed.

African American and Latino children in poor neighborhoods are being hurt the most by keeping schools closed. The president should spend these last days of the campaign being the champion of the right of every American child to go to school.

Since school is an essential source of food and often the only opportunity to have access to computers and Internet connectivity for many poor children, they are especially disadvantaged when the politicians and the unions keep them locked out. The president can spend part of virtually every speech describing the human cost of shutdown — and especially the cost to the poor.

Second, to the economy is the issue of Vice President Biden’s character and corruption. Simple facts that are already public and uncontested should be repeated.

For instance, the University of Pennsylvania’s Biden Center received $70 million from the Chinese communist dictatorship while Biden collected $911,000 over three years from the school while doing virtually nothing. Things like this are part of a larger pattern of self-enrichment and abuse of public trust.

More and more facts are going to come out about the Biden family process of self-enrichment at the expense of America (there are thousands of emails, at least two smartphones filled with more material, and more “insiders” planning to talk).

However, the reality is that the anti-Trump propaganda media will do everything possible to minimize the facts, distort the stories, and exonerate Biden from any allegations of wrongdoing regardless of the evidence. Only a constant low drumbeat from the president, vice president, surrogates, and advertising can drive the facts to the American people past the wall of pro-Biden hostility.

If calling out Biden self-enrichment is a strategy, it will move independents and even some Democrats. If it is only a tactic, it will fade away. The difference could be an amazing number of votes.

Finally, the president must spend about 10 percent of his time explaining the future with COVID-19 and the steps being taken to cope with it. This includes preparing schools to open safely, maximizing opportunities for small businesses and restaurants, and developing new therapies.

It also means communicating the steps to defeat the virus, such as vaccine development, production and distribution. The American people are still worried and threatened enough by the coronavirus that at least 10 percent of the closing days must be spent reassuring them that President Trump has a plan he is aggressively executing.

This 70-20-10 campaign will maximize the opportunity to win so decisively that it will be impossible for the Democrats to steal the election.