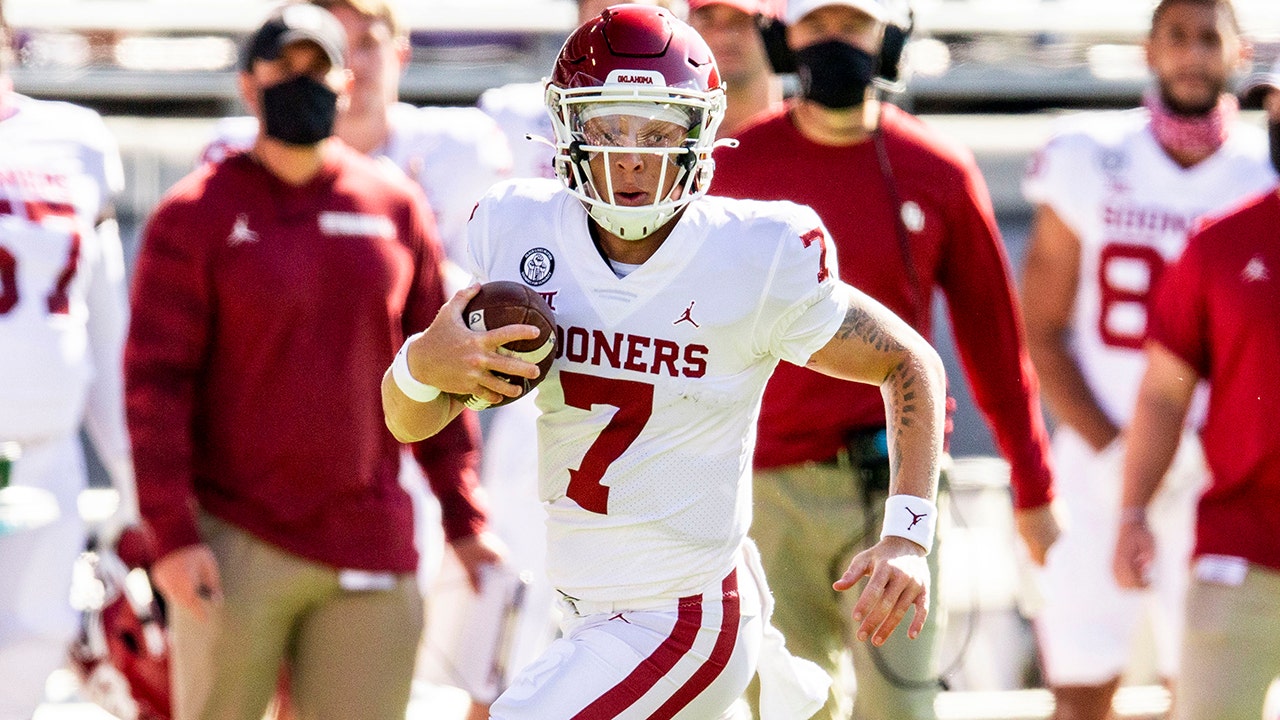 Spencer Rattler didn’t throw an interception for the first time since the opener, and Oklahoma led from the first possession.

The Sooners have their first winning streak of the pandemic-altered 2020 season, and might get back in the Top 25 after their longest absence in 21 years.

Rattler threw for 332 yards and two touchdowns — both on long touchdowns to Marvin Mims — and Oklahoma had little trouble avoiding a rare second straight loss in a true road game, beating TCU 33-14 on Saturday.

“I think more than ever this team really wants to find out what we can be, and doesn’t want this year to all of a sudden be over, it’s such a quick year with the reduced schedule and everything else,” coach Lincoln Riley said. “They don’t want to get to the end of this and not have a good taste of what we feel like this team’s potential was.”

Mims’ scoring catches were from 50 and 61 yards, and he set up one of Gabe Brkic’s four field goals with a 38-yard punt return, while Rattler averaged almost 26 yards per completion with five connections of at least 33 yards.

Unranked since the first week of October, Oklahoma (3-2, 2-2 Big 12) hasn’t gone this long outside the Top 25 since 1999, when former coach Bob Stoops started building what became a perennial contender again before it was passed along to Riley.

The Sooners had never been unranked in three-plus seasons under Riley before consecutive losses to Kansas State and Iowa State sent them tumbling out of the poll from a familiar spot in the top five.

But OU built on a four-overtime win over rival Texas by returning to the Dallas-Fort Worth area two weeks later and dominating the Horned Frogs (1-3, 1-3).

It was the Sooners’ seventh straight win in the series, a streak that includes the 2017 Big 12 championship game, and they are 9-1 against the Horned Frogs since TCU joined the Big 12.

Oklahoma had won 24 of 25 true road games before the loss at Iowa State, which was a second straight regular-season loss for the first time since Stoops’ 1999 debut. The Sooners are now 14-2 in true road games under Riley.

“I’m excited about where this team can go,” Riley said. “I hope the team senses it. We’re still not even scratching the surface of what we feel like we can be. But we’re getting closer.”

Max Duggan threw his only touchdown pass with the game out of reach late in the fourth quarter as TCU lost its second straight since beating the Longhorns in Austin when Texas was ranked in the top 10.

Mims, a freshman playing not far from his home in the suburbs north of Dallas, had his first 100-yard game with 132 yards on four catches and is up to a team-leading six touchdowns.

Rattler had a 43-yard completion to Seth McGowan on the opening drive, which ended with 12-yard scoring run by T.J. Pledger, a junior who has had the first two 100-yard outings of his career the past two games. He had 122 against TCU.

A 44-yarder to Theo Wease led to a field goal on OU’s second possession as Rattler finished 13 of 22 without an interception as the Big 12 leader in that category coming in ended a three-game streak with at least one pick.

“The first drive, we had four guys not do something they were supposed to do,” TCU coach Gary Patterson said. “Early in the game, you’ve got come out firing and do the things you need to do so you can get a stop. And I’ve got to keep doing a better job of calling plays.”

Oklahoma: TCU’s reputation through the years as one of the best defensive programs in the country is well-deserved. But it hasn’t help up very well against the high-powered OU offense. The Sooners fell just short of their sixth 500-yard game in the past seven against the Horned Frogs. In those seven games, OU has outgained TCU by more than 160 yards per game.

TCU: The steady decline of the offense from the season opener continued. While the Horned Frogs avoided a season low in total yards, a good chunk of their 351 yards came with the game out of reach in the fourth quarter. That was also after Patterson essentially conceded by punting on fourth down with less than a yard to go from his 19-yard line trailing 30-7 midway through the fourth.

“Bottom line to it, you can’t embarrass your kids,” said Patterson, whose team had just 75 yards rushing. “You’re talking about a game that was a three-score game. I think we ended up stopping them, didn’t we? After that punt?” Yes, TCU did force a subsequent OU punt.

With two field goals in the fourth quarter, Oklahoma extended its school record of scoring at least 28 points to 57 consecutive games. The second-longest active streak in the nation going into the day was 18 for SMU. OU’s streak is the longest since at least 1980.

Oklahoma: At Texas Tech next Saturday.

TCU: At Baylor next Saturday.