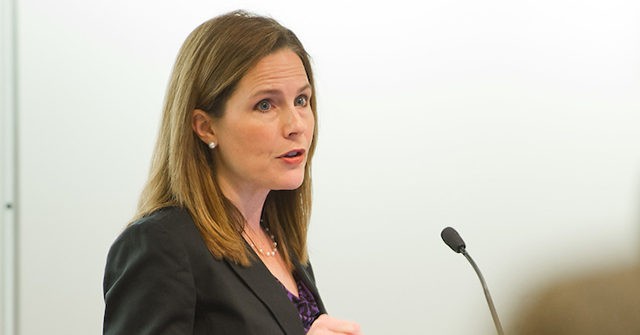 The following article is sponsored by the Judicial Crisis Network and authored by Ken Blackwell.

President Trump is delivering on his promise to appoint judges that respect our Constitution. Before his election, he vowed to restore the judiciary and name Supreme Court nominees whose judicial philosophy reflects that of the late Justice Antonin Scalia.

As President Trump said during the second presidential debate in 2016, “I am looking to appoint judges very much in the mold of Justice Scalia. I’m looking for judges—and I’ve actually picked twenty of them so that people would see—highly respected.”

The impending Supreme Court confirmation of Judge Amy Coney Barrett, who clerked for Justice Scalia, is further proof President Trump is keeping his pledge to end decades of judicial activism. Judge Barrett, moreover, is exactly the woman to achieve that goal.

As she said during her hearings, she is bound by the rule of law. “Judges can’t just wake up one day and say, ‘I have an agenda. I like guns, I hate guns. I like abortion, I hate abortion,’ and walk in like a royal queen and impose their will on the world.”

For far too long, that hasn’t been the case with many of our Supreme Court justices, who for years have been circumventing Congress and acting as super-legislators instead of an independent third branch of government designed to keep the other two branches honest.

As Sen. Ted Cruz (R-TX) said, “[D]ecades ago, activists on the far left decided that democracy was too cumbersome. It was too slow. And it was too difficult to persuade their fellow citizens that their policy prescriptions were sound and wise.”

Liberal activists sought to do through the Court what they couldn’t accomplish through the people’s representatives. “So, instead they resorted to litigation, trying to get judges to mandate the public policy outcomes they wanted—even if the voters disagreed,” said Cruz.

The job of a judge, however, isn’t to reinforce prevailing political thought. As the late Chief Justice William Rehnquist said, “Somewhere ‘out there,’ beyond the walls of the courthouse, run currents and tides of public opinion which lap at the courtroom door.”

Judge Barrett, a professor at Notre Dame Law School who three times was voted distinguished professor of year, is the epitome of an independent judge who will faithfully discharge her duties and not let her beliefs influence her decision-making.

The ordinance mandates those who protest outside medical facilities, abortion facilities included, stay eight feet away from facility patrons unless given consent to get closer. This is proof-positive Judge Barrett will respect precedent and judge accordingly.

President Trump is transforming the judiciary. With the confirmation of soon-to-be Justice Barrett and Justices Brett Kavanaugh and Neil Gorsuch, President Trump is making history. Our last four presidents saw two nominees apiece make it to the Court.

Not since President Ronald Reagan, however, have we seen so many Supreme Court nominees successfully make it through the judicial confirmation process. Even then, President Reagan nominated only two people to the Supreme Court during his first term.

It’s a remarkable accomplishment and a testament to the president’s sincerity on the issue, not to mention the more than 200 lower-court judicial nominees who’ve been confirmed to district and appellate courts nationwide under President Trump’s leadership.

Thanks to him, we’ll also likely have soon-to-be Justice Barrett, who’s only 48 years old, on the bench for decades to come. She’ll bring a new perspective to the court, but will also join with Justices Gorsuch, Kavanaugh, Thomas, and Alito in challenging Congress and state legislatures to do their job instead of punting every issue they’re afraid to touch.

Ken Blackwell, chairman of the Constitutional Congress, Inc, is an advisor to the Family Research Council in Washington D.C.