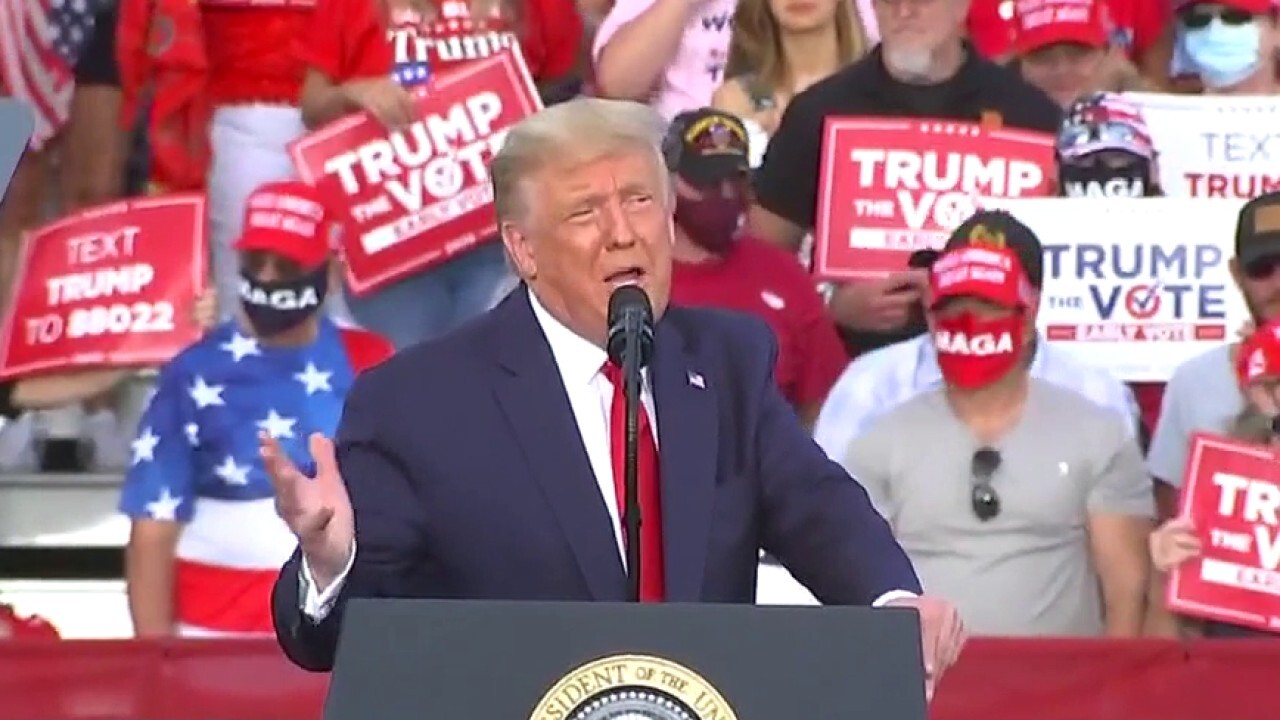 With tens of millions of Americans watching, President Trump delivered a dominating debate performance Thursday night and reminded us that he has done more for our country in the last 47 months than former Vice President Joe Biden did in 47 years as a failed and corrupt career politician.

And with nowhere for Biden to hide, Trump did what the left-wing media have been completely unwilling to do in this entire campaign — press Biden on his and running mate Sen. Kamala Harris’ radical agenda, along with Biden’s long history of peddling political access to line the pockets of his family members.

Biden admitted that his goal is to eventually shut down the oil industry, and presumably the natural gas and coal industries as well. This would result in a ban on fracking.

This should send a clear message to the millions of Americans whose jobs are in or dependent on fossil fuels industries: Joe Biden is coming for your jobs.

The president made Biden explain why he wants to place more burdensome regulations on small businesses and defend a tax plan that would raise taxes by $4 trillion and reduce median household incomes by an estimated $6,500.

President Trump exposed how Joe Biden’s health care proposal would lead us down a ruinous road to government-run socialized medicine — and with it, the elimination of private health insurance plans for 180 million Americans.

When President Trump brought up the bombshell report that Joe Biden discussed business dealings with his son Hunter while he was vice president, Biden didn’t refute the authenticity of the allegations.

The refusal by the liberal media to cover credible accusations of corruption by the Bidens for the sole reason that it could damage Joe Biden’s political prospects goes to show why voters have lost faith in any notion of having a fair and independent press in our country.

Couple the anti-Trump media’s blatant bias with Big Tech flat-out censoring the few stories concerning Biden’s corruption that do get published, and you see the elites in our country are acting more like something we would expect to see in a foreign dictatorship than in our democracy.

Despite the leftist media colluding to shield Biden from any scrutiny, there is one thing all the media bias in the world can’t cover up: President Trump’s record of delivering real results for all Americans the past four years.

This is why even during the worst public health crisis in a century, 56% of Americans believe they are better off now than they were four years ago. This is thanks to President Trump’s leadership.

Americans know that President Trump built a strong economy once before, and he’s doing it a second time by leading a Great American Comeback.

They know he has fought for and delivered better trade deals, as well as fought to get our allies to pony up and pay their fair share towards our mutual defense commitments.

They know he has pursued an aggressive deregulatory agenda that has allowed us to become energy-independent, advancing our economic as well as national security interests.

They know President Trump has followed through on his promise to appoint rule-of-law judges and qualified constitutionalists to the federal bench at a record pace.

No single issue unites Republicans like judicial appointments, and there is no better proof of promises made and promises kept under President Trump’s leadership than the fact that on Monday the Republican Senate will vote to confirm Judge Amy Coney Barrett as a Supreme Court justice.

With Joe Biden promising to fundamentally transform the third branch of government, never has the issue of justices been as important as it is right now.

All these issues and many more are on the ballot just a little over a week from now.

More than any one specific set of policies, however, Thursday’s debate showed Americans why the choice they face in this election is as clear as it has ever been.

Americans saw for themselves this election is a choice between career politician Joe Biden — who after almost a half-century in Washington has left Americans worse off — and a fighter in President Trump, who goes to battle on behalf of the American people every day.

Voters face a choice between an entrenched political establishment that only ever looks out for itself versus an outsider who isn’t afraid to take on the special interests.

A choice between a broken Beltway culture that all too often rewards peddling political access and influence — versus a change agent who is a champion for our farmers, workers, and the forgotten men and woman all across America.

As the debate showed one more time, President Trump doesn’t sound like a typical career politician because he isn’t one.

He’s the fighter we elected in 2016, and when we reelect him to fight for us for four more years, the best is yet to come.