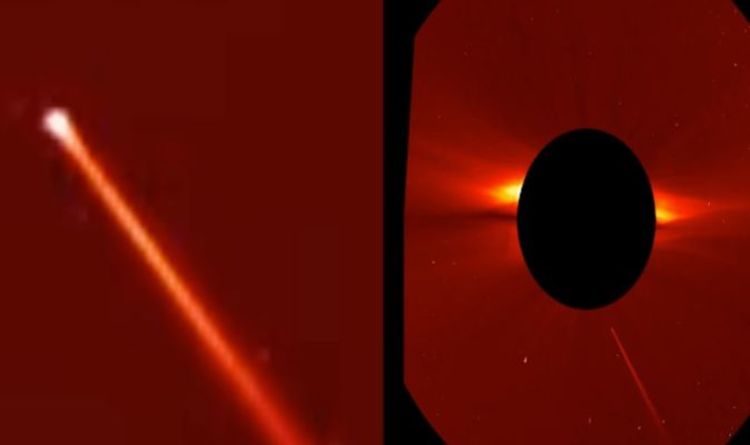 While scientists state categorically that the Sun is essentially a giant ball of fire which provides heat to the solar system, conspiracy theorists have other bizarre ideas. Videos from NASA have shown what appears to be two objects exiting the Sun.

This has led conspiracy theorists to believe that the Sun is hollow, and aliens are residing in it.

The footage from NASA was taken by NASA’s Solar and Heliospheric Observatory (SOHO) satellite and appears to show objects leaving the surface of the Sun.

Prominent alien enthusiast Scott C Waring claimed it is “100 percent” proof that extraterrestrials are residing inside our host star.

Mr Waring made the extraordinary claims on his blog UFO Sightings Daily, where he explained his belief there are small planets inside the Sun which aliens live on.

“One entering our sun and one exiting our Sun. This does reinforce my Hollow Sun Theory.

“A theory that says there is a whole mini solar system of mini moon size planets within our Sun.

“One shot in from far away, only to disappear, the other shot out of the side of the Sun during a solar explosion.

These specks of dandruff can be anything from bits of chipped paint drifting aimlessly in zero gravity, flakes of ice or spacecraft insulation that has broken off.

He said: “I’ve had enough experience with real spaceflight to realise that what’s being seen in many videos is nothing beyond the ‘norm’ from fully mundane phenomena occurring in unearthly settings.”

Mr Oberg argued the human brain is not wired to make sense of these tiny objects floating above Earth.