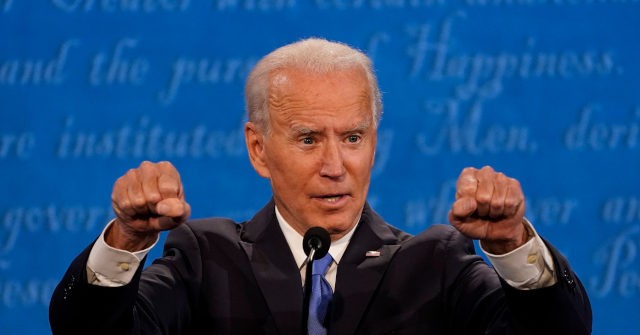 Former Vice President Joe Biden’s campaign has shelled out more money for television and digital advertising than any presidential candidate in the nation’s history, the Hill reported Friday.

“Biden’s campaign has spent more than $582 million on television advertising since launching his campaign last year, according to data from the nonpartisan firm Advertising Analytics. In just the last week, Biden’s team spent $45 million on air,” the article said.

The amount surpasses President Donald Trump’s campaign, which reportedly spent $342 million over the past two years.

“The two sides dropped $160 million on television and digital ads in just the past seven days. Trump spent slightly more than Biden on Facebook and Google advertising, the data shows — $14 million versus about $12.7 million,” the Hill article continued.

In September, the Trump campaign released a series of advertisements contrasting the president’s response to the violence and rioting in the nation’s major cities with that of Biden.

“Lawless criminals terrorize Kenosha,” the ad’s narrator said. “Joe Biden takes a knee. Biden and the radical left’s weak response has led to chaos and violence. And their calls for defunding the police would make it worse.”

This month, the Biden campaign released advertisements aimed at Catholic and evangelical Christian voters in an effort to portray the former vice president and Sen. Kamala Harris (D-CA) as the “clear moral choice” for America, Breitbart News reported:

The Biden campaign is investing financial resources in an attempt to win over Americans of faith at the same time the Democrat Party has embraced the radical position of access to abortion at any time during pregnancy; an insistence it has no room for pro-life individuals or candidates; a stated intention to provide full taxpayer funding for abortion industry giant Planned Parenthood; and an announced plan to force taxpayers to fund abortions.

“Both Biden and Harris have made clear they will prioritize the agenda of Bernie Sanders and AOC [Alexandria Ocasio-Cortez], and will destroy everything Catholics and all people of faith hold dear,” said Brian Burch, president of CatholicVote.