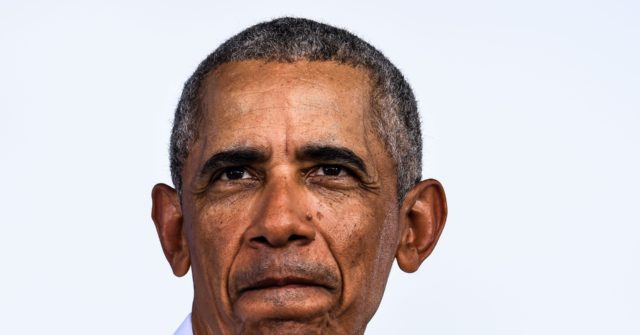 President Barack Obama delivered a speech in Florida on behalf of Joe Biden’s presidential campaign on Saturday, in the course of which he stated at least nineteen false claims about President Donald Trump and his record.

1. “He doesn’t have a plan” for coronavirus. Obama cited the presidential debate on Thursday. However, the president did, in fact, specifically mention Operation Warp Speed, his plan to develop and distribute a coronavirus vaccine quickly.

3. “He doesn’t even acknowledge that there’s a problem” (i.e. coronavirus).  This is obviously not true, and provably so. Trump even talked about coronavirus in his State of the Union address, which Speaker Nancy Pelosi (D-CA) ripped in two.

4. Trump said “if you put some bleach in you, that might clean things up.” Trump never said that. He mentioned new, experimental technologies in UV light, and also specifically said he was not talking about putting bleach inside anyone.

5. “America created 1.5 million more jobs in the last year of the Obama-Biden administration than in the first three years of the Trump-Pence administration.” Obama seems to be saying that more jobs were created in 2016 than in 2017, 2018, and 2019 combined, which is demonstrably untrue. New revisions earlier this year indicated that slightly more jobs were created in 2016 than in any particular subsequent year. However, seasonally adjusted data from the Bureau of Labor Statistics show that more people were employed in each of the first three years of Trump’s presidency than in Obama’s last. In addition, Trump faced a different task. It is arguably easier to add jobs in the early stages of a recovery than it is to add jobs during a recovery already eight years old. The Obama-Biden recovery was the slowest since the Second World War.

6. Black unemployment went down, but “not because Donald Trump did anything.” It is possible to credit several Trump policies with lowering black unemployment, especially immigration enforcement. A 2007 paper by the National Bureau of Economic Research noted: “immigration has more far-reaching consequences than merely depressing wages and lowering employment rates of low-skilled African-American males: its effects also appear to push some would-be workers into crime and, later, into prison.” Trump’s focus on domestic manufacturing capacity also arguably played a role.

8. “He barely pays income taxes.” In fact, Trump pays tens of millions of dollars in taxes, despite losses in some years.

9. Trump has “secret Chinese bank accounts.” The Trump hotel chain used a legal bank account to pay taxes in China when it made licensing deals. It is not a personal account and the account has reportedly been inactive for five years.

10. “His first year in the White House he only paid $750 in federal income tax.” Trump paid over seven million dollars in taxes in 2017, but used a tax credit from an earlier year to pay it. Also, he donated his entire salary to the government.

11. Trump has no plan “when it comes to preexisting conditions.” The president has constantly promised to provide health insurance for people with pre-existing conditions; he issued an executive order laying out his plan in September.

12. Trump “drove up costs” under Obamacare. Actually, Obamacare premiums have been falling under Trump.

13. Trump said: “We hope the Supreme Court takes your health insurance away.” Trump never said that. He said he hoped the Supreme Court would end Obamacare (“I hope that they end it”), noting his desire to replace it with a better plan.

14. Trump is “MIA” when “Russia puts bounties on the heads of our brave soldiers in Afghanistan.” The Pentagon said that there was never “corroborating evidence” of a supposed Russian program to pay bounties for killing U.S. soldiers.

15. “Joe Biden would never call the men and women of our military suckers and losers.” Neither would Trump, because it never happened. Biden did call U.S. troops “stupid bastards,” however. (He claimed that he had been joking.)

16. Trump asked if we could “nuke hurricanes.” Even Snopes.com regards this claim as “unproven.” Obama also claimed that Trump had suggested selling Puerto Rico, which even the source for that claim says was never seriously considered.

18. Trump “threatens people with jail for just criticizing him.” This does not appear to have ever happened. Trump did threaten a reporter with prison time — after he defied instructions not to photograph a classified letter from Jim Kong-un. It was the Obama administration, that tried to prosecute journalist James Risen of the New York Times, and which jailed an obscure filmmaker after it blamed an obscure anti-Islamic YouTube video for the Benghazi terror attack in September 2012.

19. The EPA is “giving polluters free reign to dump unlimited poison into our air and water.” Demonstrably untrue. Obama delivered several other attacks on members of Trump’s Cabinet in the same vein (“declared war on workers” etc.).