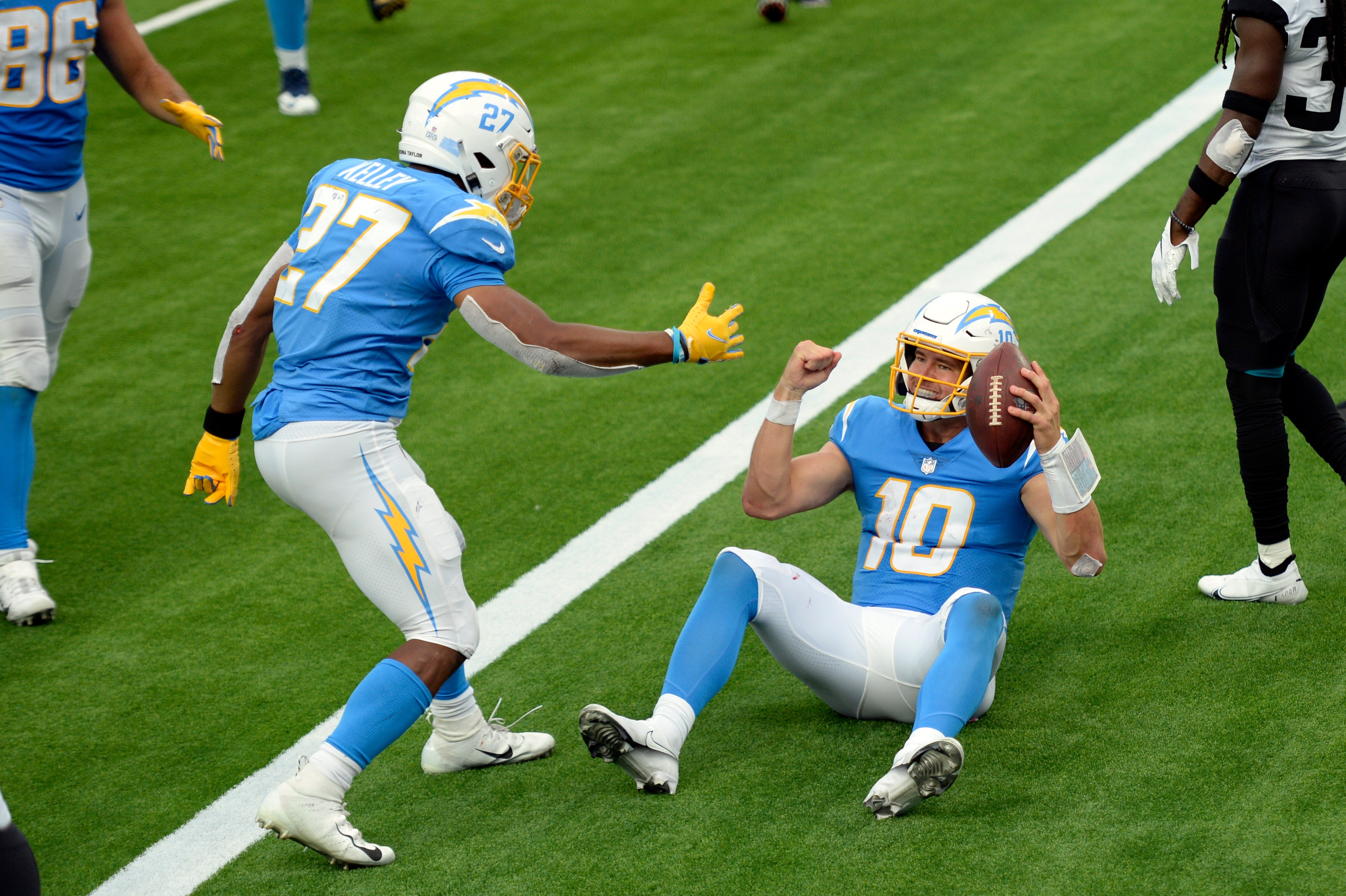 Justin Herbert got his first NFL win, throwing for 347 yards and three touchdowns as well as running for a score as the Los Angeles Chargers snapped a four-game losing streak with a 39-29 victory over the Jacksonville Jaguars on Sunday.

Herbert, the sixth overall pick in April’s draft, completed 27 of 43 passes. He also rushed for 66 yards, a single-game high for a Chargers QB.

Herbert joined Cincinnati’s Joe Burrow as the only rookie quarterbacks in NFL history with 300 yards, at least three passing TDs, and one rushing in a game. Burrow did that earlier Sunday in the Bengals’ 37-34 loss to the Cleveland Browns.

More importantly for Herbert, was that first win as an NFL starting quarterback despite Los Angeles blowing another large lead.

The Chargers jumped to a 16-0 second-quarter lead but squandered a double-digit advantage for the fourth time in five games. Jacksonville scored 21 straight points to go up by five early in the third quarter.

Jacksonville was ahead 29-22 late in the third quarter when Los Angeles regained control. Herbert connected with Jalen Guyton for a 70-yard touchdown up the right sideline to tie it. Four plays after Tevaughn Campbell forced Dede Westbrook’s fumble the ensuing kickoff — Troymaine Pope recovered at the Jaguars 19 — Herbert scrambled around right end from 5 yards to put the Chargers in front 36-29.

Tight ends Donald Parham and Virgil Green also caught touchdowns for the Chargers, while Keenan Allen had 10 receptions for 125 yards.

James Robinson led Jacksonville with 119 rushing yards on 22 carries and a touchdown. Gardner Minshew completed 14 of 27 throws for 173 yards and a pair of TDs.

The Jaguars did not get their initial first down until nearly 20 minutes in, but trailed by only 16-14 at halftime. Robinson put Jacksonville on the board with a 4-yard run and then caught a 9-yard screen pass TD with 11 seconds left in the half.

Jacksonville went up 21-16 when Daniel Thomas blocked Ty Long’s punt and returned it 16 yards for a touchdown.

Los Angeles once again got off to a fast start. After Michael Badgley’s 35-yard field goal on the opening drive, rookie Joe Reed scored his first NFL touchdown on a 7-yard jet sweep around right end. It was the Chargers’ first rushing touchdown since Herbert in Week 2 against Kansas City. Badgley missed the extra point.

Parham became the first Chargers player in 42 years to get touchdowns on each of his first two NFL catches when he drew single coverage for a 22-yard pass from Herbert.

Jaguars: CB Sidney Jones left during the first half with a back injury and did not return. … WR Dede Westbrook suffered a knee injury on a kickoff return late in the third quarter and was carted off. … LB Dakota Allen did not return after an ankle injury in the first quarter.

Chargers: travel to Denver next Sunday.