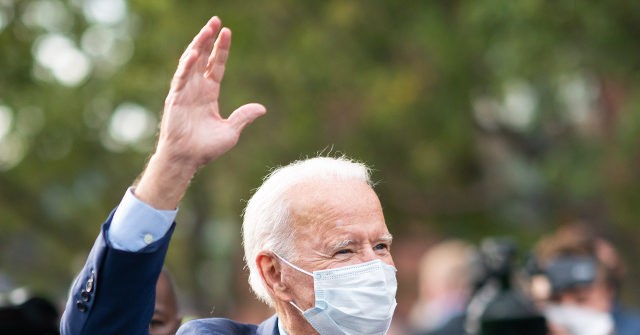 New Mexico Second Congressional District Republican nominee Yvette Herrell and New Mexico Republican Party Chairman Steve Pearce joined SiriusXM’s Breitbart News Saturday where they discussed Joe Biden’s stance on energy and fuel and the impact it will have on Democrats in the state.

After Biden came out against fracking and the oil industry and insisted he would transition America away from oil, Rep. Xochitl Torres Small (D-NM), Herrell’s Democrat challenger, has attempted to distance herself.

According to Torres Small, “Energy is part of the backbone of New Mexico’s economy.”

“I disagree with VP Biden’s statement tonight. Energy is part of the backbone of New Mexico’s economy,” Torres Small wrote in a tweet. “We need to work together to promote responsible energy production and stop climate change, not demonize a single industry.”

“I will continue to stand up to my party when they’re out of touch with the reality on the ground in #NM02,” she added.

Herrell and Pearce both warn that Biden’s stance on those industries that have a great impact on the people of New Mexico could impact the success of Torres Small and Democrats in the state.

“The only reality in this entire scenario is Xochitl Torres Small is out of touch with reality,” Herrell told host Matthew Boyle. “Our district here is heavy oil and gas. That’s forty percent of our state’s revenue and to our general fund. The fact that she voted to allow future presidents to ban fracking; the fact that she stood up in a debate, and on paper, and has said that she is all for and voted to rejoin the Paris Climate Accord Agreement.”

Questioned on whether she believes Torres Small should withdraw her endorsement of Biden, Herrell said, “Let’s be honest, if she was really standing up to her party, she wouldn’t be voting with Nancy Pelosi 95 percent of the time, and she wouldn’t have voted twice to impeach President Trump, who won this district by over ten points in 2016.”

Herrell also stated that Torres Small is “quiet on the issues that matter to New Mexico” and “supports the Energy Transition Act, which is New Mexico’s Green New Deal.

If “implemented to the end,” Herrell says the New Mexico version of the Green New Deal could cost the state “hundreds of thousands of jobs.”

In his interview with Breitbart News Saturday, Pearce suggested that “the war on oil is not something New Mexico needs.”

“Forty percent of our tax revenues come from oil, thousands of jobs come from oil, and it is just going to decimate our state if Joe Biden is elected because he has said many times that fossil fuels have no place in his administration, that he will ban fracking,” Pearce said.

Pearce also noted Biden’s “lies” on fracking and his ability to “mislead the public” during the final presidential debate. Pearce stated Biden’s dismissal of fracking and oil is “one more extreme position that Biden expressed.”

Pearce also claimed that Torres Small does not have “the courage to buck her leadership,” meaning Nancy Pelosi and other Democrat Party leaders. “Nancy Pelosi will help Joe Biden kill the oil industry,” Pearce said.

“I don’t care what she says on the floor of the house,” Pearce said of Torres Small. “I know what she does and how her votes go and how her party is going to do. She’s just one more disappointment. … I think Congresswoman Small is in deep trouble, and she knows it.”

Biden has consistently criticized fracking and has promised to ban the process, along with his running mate Sen. Kamala Harris (D-CA).

Asked on July 31, 2019, during the second Democratic Party presidential primary debate whether there would be “any place for fossil fuels, including coal and fracking, in a Biden administration,” Biden responded to CNN’s Dana Bash and said, “No, we would — we would work it out. We would make sure it’s eliminated and no more subsidies for either one of those, either — any fossil fuel.”

But a few months ago he said there would be no place for fracking in a Biden Administration: “we would make sure it’s eliminated.”pic.twitter.com/gLSIZEnwP8

At the final presidential debate, Biden lied and insisted, “I never said I oppose fracking.”

Harris, who attempted to persuade viewers of the vice presidential debate into believing that Biden “will not end fracking,” has also admitted that she is in “favor of banning fracking.”