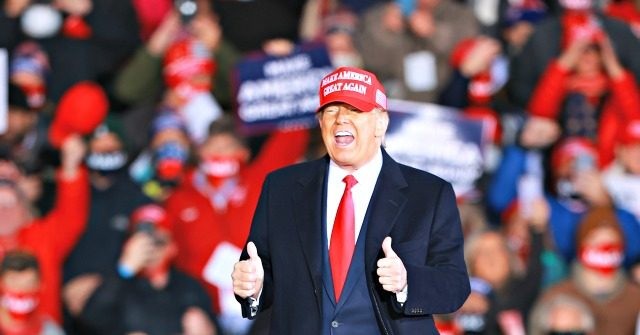 Three post-debate polls in swing states that will decide the 2020 election show President Donald Trump with a small lead.

In Michigan, the Trafalgar Group, one of the most accurate swing state pollsters in 2016 and 2018, shows Trump leading former Vice President Joe Biden by two points, 49 to 47 percent, with third party libertarian nominee Jo Jorgensen at two percent. Earlier this month, this same pollster had Trump up by a single point, 47 to 46 percent.

In Arizona, Trump sits at 50 percent, compared to just 47 percent for Biden. Jorgensen is again at two percent.  An earlier Trafalgar poll had Trump up by four, 48 to 44 percent. So Trump’s lead shrank by a point, but he is at the magic 50 percent mark.

Trafalgar’s number are currently something close to outliers compared to other pollsters looking at those same states.

In Florida, the RealClearPolitics poll of polls shows Biden up 1.5 points.

In Arizona, Biden is up 2.4 points in the average.

One thing we can look at now is what actual voting looks like. We don’t yet know who specifically is winning the vote, but we do know the party affiliation of those voting early, and even the far-left Politico has been forced to admit that things do not look very good for Joe Biden in Florida right now.

“Florida Republicans are pouring out of the trenches,” an alarmed Politico writes. “After weeks of Democrats outvoting them by mail, Republican voters stormed early voting precincts in person this week, taking large bites out of their opponents’ historic lead in pre-Election Day ballots.”

Democrats still held an early vote lead of 387,000 on Saturday, but that’s down 21 percent from the lead they held three days ago, and Republicans — including yours truly — prefer to vote in person on Election Day. Especially in Florida.

Here’s a key metric Politico reports on that should very much worry Team Biden: “According to TargetSmart’s analysis, Black voters aged 18 to 29 have cast 15.8 percent of the total ballots so far in Florida. That’s half a percentage point down from the same period in 2016.”

So as of right now, Biden is doing worse in Florida with a key constituency, young black voters, than even Hillary did. Diminished black turnout, Hillary’s inability to recreate the Obama coalition, is something that is widely seen as contributing to her humiliating loss.

In Michigan, of the 3.1 million mail-in ballots requested, 39 percent of those requests came from Democrats, 41 percent from Republicans.

Right now, two million of those ballots have been returned, and the GOP has a two point lead of 41 to 39 percent.

So, Republicans are leading the early vote count by two points right now IN MICHIGAN, and in the past, Democrats have almost always had to build a sizable early vote lead to overcome the surge of Republican turn out on Election Day.

A final thing to keep in mind… You have a much better chance of ensuring your vote is counted if you show up in person on Election Day. Mail-in ballots have a much higher rejection rate than in-person votes.