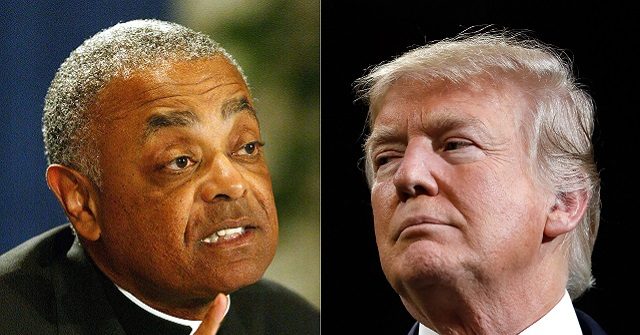 ROME — Pope Francis announced the names of 13 bishops and priests he intends to make cardinals in November, including the outspoken anti-Trump Archbishop of Washington, D.C., Wilton D. Gregory.

“Next November 28, the eve of the first Sunday of Advent, I will hold a consistory to name 13 new cardinals,” the pontiff stated Sunday following his weekly Angelus address, one of whom is Archbishop Wilton Gregory.

Archbishop Gregory, the first African American archbishop of Washington, D.C., has been a vocal critic of President Donald Trump, accusing him of racism and exploitation of Catholic saints for political purposes.

In his very first public statement after being installed as archbishop in 2019, Gregory went after Trump by name, echoing criticism by Democrat leaders of the president’s remarks concerning Rep. Elijah Cummings (D-MD) and suggesting that those remarks were motivated by racism.

“I fear that recent public comments by our President and others and the responses they have generated, have deepened divisions and diminished our national life,” the archbishop declared, referring to them as “public attacks.”

Trump had called Cummings “a brutal bully” for “shouting and screaming at the great men & women of Border Patrol about conditions at the Southern Border, when actually his Baltimore district is FAR WORSE and more dangerous.”

In his statement, Gregory said that the president’s remarks had racist overtones.

“Our faith teaches us that respect for people of every race, religion, gender, ethnicity and background are requirements of fundamental human dignity and basic decency,” he said. “This include newcomers to our country, people who have differing political views and people who may be different from us.”

“We all need to reject racism, disrespect or brutality in speech and action,” he continued, adding that “racism occurs when we ignore the fundamental truth that, because all humans share a common origin, they are all brothers and sisters, all equally made in the image of God.”

“We must all take responsibility to reject language that ridicules, condemns, or vilifies another person because of their race, religion, gender, age, culture or ethnic background,” the archbishop said.

In point of fact, Trump never mentioned or even hinted at Cummings’s race.

“As an American, a Christian, a Catholic pastor, I pray that our President, other national leaders and all Americans will do all we can to respect the dignity of all God’s children and nothing to further divide our nation. The growing plague of offense and disrespect in speech and actions must end,” Gregory concluded.

This past June, Gregory once again attacked the president, declaring that his visit to the shrine of Saint John Paul II in Washington, D.C., was a “manipulation” of a Catholic shrine, adding that it “violates our religious principles.”

“I find it baffling and reprehensible that any Catholic facility would allow itself to be so egregiously misused and manipulated in a fashion that violates our religious principles, which call us to defend the rights of all people even those with whom we might disagree,” the archbishop said in a statement.

In his comments, Gregory suggested that the president’s visit was an affront to Pope John Paul II, who would never have condoned Trump’s methods of quelling the violent protests that plagued U.S. cities this past summer.

“Saint Pope John Paul II was an ardent defender of the rights and dignity of human beings,” the archbishop said. “His legacy bears vivid witness to that truth. He certainly would not condone the use of tear gas and other deterrents to silence, scatter or intimidate them for a photo opportunity in front of a place of worship and peace.”

In point of fact, the purpose of Mr. Trump’s visit to the shrine — which commemorated the 41st anniversary of John Paul’s historic visit to Poland 1979 — was to issue an executive order on advancing international religious freedom, a topic dear to the heart of Pope John Paul II.

Over the years, Trump has expressed admiration for Pope John Paul II for his leadership at a key moment in Church history and that of the Polish nation.

In a 2017 speech given to the Polish people in Warsaw, Trump called John Paul a “hero.”

On June 2nd, 1979, the president recalled, “one million Poles gathered around Victory Square for their very first mass with their Polish Pope.”

On that day, “every communist in Warsaw must have known that their oppressive system would soon come crashing down,” the president said, eliciting a round of applause.

“They must have known it at the exact moment during Pope John Paul II’s sermon when a million Polish men, women, and children suddenly raised their voices in a single prayer,” Trump continued. “A million Polish people did not ask for wealth. They did not ask for privilege. Instead, one million Poles sang three simple words: ‘We Want God.’”

“Together, with Pope John Paul II, the Poles reasserted their identity as a nation devoted to God,” the president continued. “And with that powerful declaration of who you are, you came to understand what to do and how to live.”

After Archbishop Gregory censured the president for his visit to the shrine last summer, a number of prominent Catholics and other Christian leaders called out the prelate for his remarks.

In a column titled “Baffling and Reprehensible,” Catholic author Phil Lawler listed seven problems with the archbishop’s statement, including its blatant partisanship and divisiveness.

The archbishop published his “inflammatory statement” without bothering to check the facts, Lawler observes, noting that the president’s visit to the shrine had no connection with the demonstrations but had been planned well ahead to coincide with the release of his executive order on international religious freedom.

Lawler also noted that Archbishop Gregory has “given over the pulpit of his cathedral” to House Speaker Nancy Pelosi, an ardent defender of abortion on demand, suggesting a “hypocritical” double standard.

It is strange that Gregory “blithely overlooks the most evident display of racial disparity on our nation: the systematic extermination of African-Americans in the womb, aided and abetted by the liberal Catholic politicians who welcomed the archbishop’s latest petulant outburst,” he said.

Brian Burch, the president of CatholicVote, said that Trump’s visit to the shrine and executive order on religious freedom should have been “celebrated” rather than condemned.

“It is regrettable that the Archbishop of Washington chose this occasion to engage in a partisan attack on the President, especially when the country is in desperate need of healing and unity,” Burch said in a statement.

“Millions of Catholics in the United States, including many within the Archbishop’s own flock, are grateful for today’s Executive Order,” Burch observed, while the archbishop’s “unfortunate partisan attack needlessly politicizes this important issue, and distracts from the plight of vulnerable religious minorities around the world.”

In a public letter to the archbishop, Ed Martin, president of the Eagle Forum Education & Legal Defense Fund, said that “your recent statement condemning President Trump is causing scandal, Archbishop.”

“Please clarify your remarks by retracting the statement and apologizing,” he continued. “The blatantly partisan nature of your comments alienates half of your flock by expressing subjective political opinions rather than evangelizing using the objective truths of the Catholic faith.”

Rev. Eugene F. Rivers, director of the William J. Seymour Institute for Black Church and Policy Studies in Boston and a prominent leader of the black Christian community, also defended the president’s visit to the shrine.

“Because the president’s visit had been prearranged and was to focus on the one issue that has transcended partisanship in recent years, this was a very difficult situation,” Rev. Rivers told Catholic News Agency (CNA).

“I don’t see how a shrine or other house of worship can turn down a visit by anyone who wants to pay their respects or pray there — let alone the president,” Rivers said. “Those who call the president a sinner should remember that Jesus regularly caused scandal by eating and welcoming those who were seen as unpopular or inappropriate during his lifetime.”

“I think Jesus welcomes anyone — including Trump,” he said.