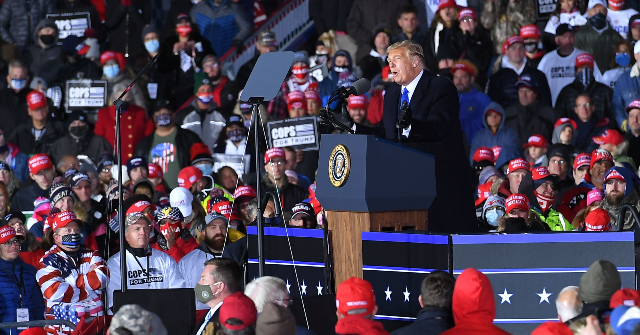 President Trump says then-President Barack Obama and Vice President Joe Biden threw former Delphi workers “to the wolves” in their bailout of the auto industry that resulted in slashed pensions for roughly 20,000 Americans.

During a campaign rally in Waukesha, Wisconsin, Trump touted his recent memorandum that orders federal agencies to devise a plan that would restore the pensions of about 20,000 former non-union Delphi Corporation workers.

“This week I signed an order to protect the pensions of workers at the Delphi Corporation … these workers were taken advantage of very badly,” Trump said. “When GM went bankrupt, Biden and Obama threw these workers to the wolves. Their pensions were totally wiped out, they were treated very unfairly. My order is to restore the pensions and healthcare benefits promised to workers in Wisconsin, Michigan, and Ohio because I will never let anyone rip off our great American workers. We’re going to take care of our workers.”

In 2009, as part of the Obama-Biden administration’s taxpayer-funded bailout of General Motors (GM), the Pension Benefit Guaranty Corporation (PBGC) terminated the pension plans of non-unionized Delphi workers. In some cases, workers had their pensions gutted by as much as 75 percent.

Exclusive: Forgotten by Obama-Biden Auto Bailout, Delphi Workers Refuse to Forget What Was Taken from Them (Part One) https://t.co/T8SME62Vb4 via @BreitbartNews Biden was a disaster on this. All talk and no action. Remember and VOTE!

Former Delphi workers who spoke to Breitbart News recently detailed how the pension-slashing scheme uprooted their livelihoods. One retiree said she lost her home, and her retirement plans to move to the Florida coast have been squashed.

Another retiree said his wife died in the process, as he was forced to find work in order to pay for her medical bills. He had assumed that after 30 years at Delphi, he and his wife would have a good healthcare plan in their retirement. That ended when his pension was cut by about 30 percent.