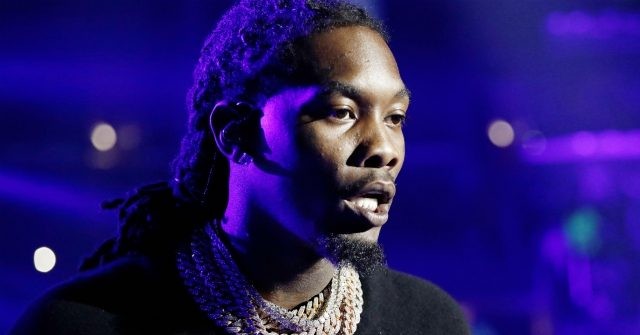 Rap star Offset, one third of the group Migos, and Biden surrogate Cardi B’s Husband, was briefly detained by police on Saturday in Beverly Hills, Los Angeles, during a pro-Trump demonstration, according to multiple reports.

Offset broadcast part of the incident to 30,000 people live on Instagram, after Cardi B, his wife, posted footage of the Trump supporters walking in Beverly Hills.

Police confirmed that Marcelo Almanzar, 20, who shares Cardi’s last name and TMZ reports is her cousin, was detained in an incident fitting that description. The report does not mention Offset; he was apparently briefly detained and released.

“We were told that you guys were waving guns at people,” one police officer said at one point in Offset’s lifestream.

The rapper can be seen repeatedly refusing to get our of the vehicle.

“You just watched somebody beat my car up with a flag. What are you talking about?” Offset responds to law enforcement.

Offset’s wife, Cardi B, can then be heard saying: “I don’t like this shit, look at this, look how they walking around with fake guns.”

According to the statement via the Beverly Hills Police Department: “[A]t approximately 5:02PM, Beverly Hills Police received information from a passerby of a subject who pointed a weapon from a vehicle at him; in the area of South Santa Monica Blvd and N. Beverly Drive. The passerby provided a license plate to the vehicle, and the vehicle was stopped by patrol units a short distance away.  After the on scene investigation, the passenger in the vehicle was arrested.  The victim of the crime did not desire to press charges for the pointing of the weapon.”

The suit alleges that Cardi B defamed a group of Long Island beachgoers by calling them “racist MAGA supporters” and posting an edited video featuring commentary of an altercation between the beachgoers and her sister, as well as her sister’s girlfriend, reportsPage Six.

Earlier this month, Cardi B attacked Trump supporters as “racist” after her sister apparently feuded with a group of beachgoers over a parking spot. The rapper took to Instagram to post a video that appears to show her sister hurling profanities at the group, one of whom was wearing a MAGA hat.

In August, Cardi B appeared to suggest First Lady Melania Trump previously worked as prostitute, tweeting: “Didn’t she used to sell that WAP?”