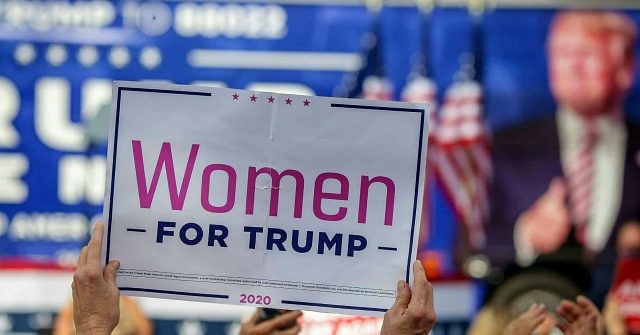 Hundreds of suburban women and other Connecticut citizens gathered in Greenwich Sunday to show their support for President Donald Trump and police officers.

A combination Trump 2020 and Back the Blue rally saw about 350 attendees meet at the Island Beach parking area and then march along Interstate 95.

Erin Chang, one of the organizers, commented, according to the Connecticut Post, on many of the signs held by attendees that read, “Silent No More,” in reference to what many believe to be the “silent majority” in support of Trump.

“We are here in support of the president,” Chang said, adding the hostility some in Connecticut hold toward Trump is intended to suppress his supporters.

She said she felt energized being part of a women’s group that supports the president:

We are here in support of freedom and we are a positive force. We’re not negative at all … This all started with two or three women for Trump and it just grew. The women in the suburbs and the women in Greenwich do support Donald Trump. It doesn’t feel like America anymore. That’s what’s so scary. The silent majority can’t voice their opinions. I couldn’t even post things with my own name. Being here and being a part of this, you feel invigorated.

New Canaan resident Elizabeth DeLuca, another of the rally’s organizers, said their group was made up of “strong Republican women” who wanted their voices to be heard. She added:

The national Women for Trump movement denounces the narrative that Trump has a “women problem.”

“They” said that women don’t support Donald Trump.
“They” said he isn’t good for women or our families.
“They” said we were supposed to vote for Hillary Clinton because we share the same body parts.

BUT “THEY” WERE WRONG!

There are millions of women who support Donald Trump and we’re not standing in the shadows anymore! We won’t be pushed around by bullies who tell us who we are “supposed” to like. And we’re not going to keep quiet now that he has been elected!

Trump supporters also played The Village People’s tune “YMCA” and danced to it as the president has done at his rallies while on the campaign trail.