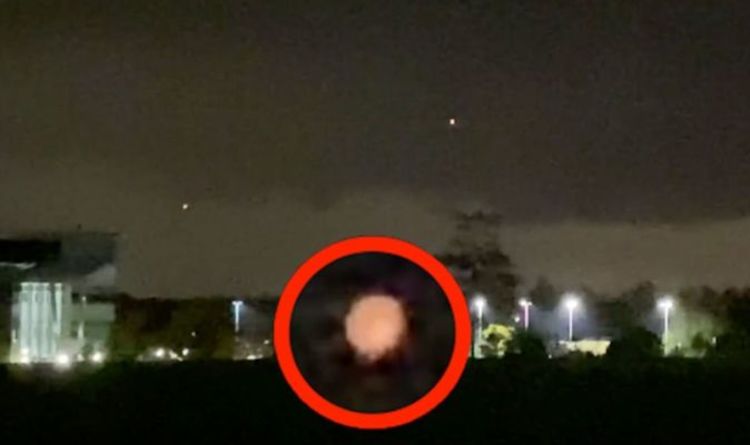 On October 23, glowing dots could be seen in the night’s sky over Guildford, England. Stunned onlookers were quick to grab their phones and begin recording the odd phenomenon. A video submitted to the UFO investigation network MUFON shows a series of red orbs floating through the sky.

An eyewitness statement submitted to MUFON said: “I was just out for a walk around the local playing fields. I witnessed more than 10 large red-orange glowing orbs, like fireballs.

“The orbs appeared either singly or in pairs, at the same point in the sky each time, and they ‘popped out’.

“No flashing or taillights and absolutely not helicopters or planes, which are both common appearances where I live and easily distinguishable.

“From the ground, they had an apparent size roughly 1/4 that of a full moon, just bigger than an aspirin. Each pair of orbs moved in a west-to-east direction and disappeared after moving around 20 degrees eastwards.

“A few minutes later the orb(s) would reappear at the same original point and move in the same direction as the previous ones.

“There was also some strange pulsating lights in a cloud moving in a geometric pattern which accompanied the sighting.

“I was able to capture some footage on my phone but the quality is not great due to night-time and lack of tripod – and my total shock at seeing this!”

Seasoned alien enthusiasts analysed the video, and believe it is proof of extraterrestrials in the UK.

While there is no official evidence of any aliens of extraterrestrial space ships on Earth, or anywhere for that matter, Mr Waring believes they are out there.

In fact, the alien hunter believes NASA and other space agencies know about said extraterrestrials, but is hiding the revelation from the public.

But Mr Waring said the coronavirus pandemic has hardened humanity, and the common person is ready for aliens.

He said: “Much like COVID-19 did to the people in each country as it spread, because the public once believed that such a pandemic would be impossible, and yet, the human race has changed their perspective on that very fast.

“That’s how disclosure of intelligent aliens would be, but it would not kill people or frighten them as much.”