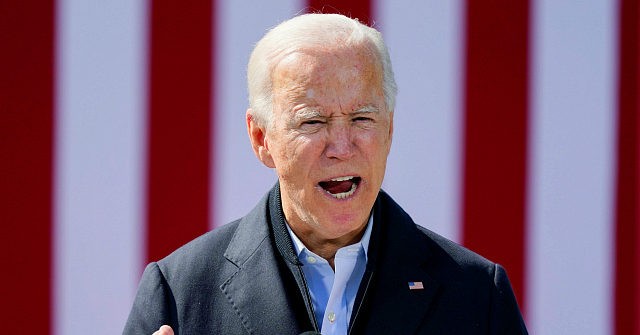 Democrat presidential candidate Joe Biden cut off a Wilkes-Barre, Pennsylvania, television reporter on Saturday who was attempting to ask a question about his son, Hunter Biden.

Biden: “There is no controversy about my son. That’s a hell of a lie. That’s a flat lie because the president has nothing to run on… it’s classic Trump.” pic.twitter.com/MQQGvddrHO

“There is no controversy,” he snapped. “That’s all a lie.”

“It’s a flat lie because the president has nothing else to run on. If you noticed, while the American people are talking about what’s happening to their families; he has no plan and at the debate, he has no plan,” Biden said.

“Everything from Wall Street Journal, other major news outlet said what he is saying is simply not true about my son, but it’s classic Trump,” responded Biden.

Biden, who has held small events where attendees stay in their vehicles and honk their approval, criticized President Donald Trump’s massive rallies.

An ex-business partner of Hunter Biden, in a news conference organized by the Trump campaign, alleged that former Vice President Joe Biden was part of discussions around his son’s efforts to form an investment venture with a Chinese oil company. …

In a statement to reporters Thursday, Anthony Bobulinski said that in 2017 Hunter Biden consulted his father about a planned venture with Chinese oil company CEFC China Energy Co. to invest in the U.S. and elsewhere. Mr. Bobulinski was also a partner.

The venture—set up in 2017 after Mr. Biden left the vice presidency and before his presidential campaign—never received proposed funds from the Chinese company or completed any deals, according to people familiar with the matter. Corporate records reviewed by The Wall Street Journal show no role for Joe Biden.

The paper reported that Biden’s campaign denied his involvement in the business dealings.

Bobulinski addressed reporters prior to the final presidential debate on Thursday.