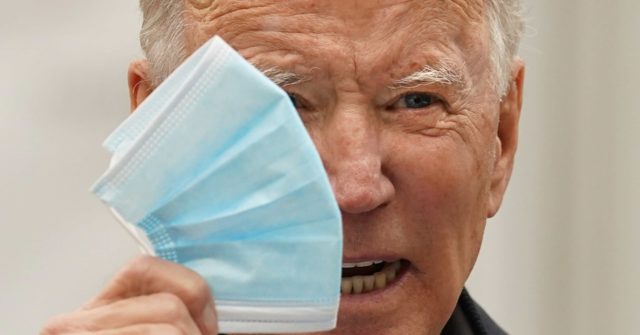 Former Vice President Joe Biden said Monday that he did not support term limits for Supreme Court justices — but would consider moving them to “another court,” which amounts to the same thing.

For months, Biden has dodged questions about whether he would “pack” the Court — i.e. expand the number of seats on the Court, and fill them with liberal justices, as some Democrats are demanding.

We must expand the Supreme Court.

At first, Biden said that voters did not deserve to know his answer about court-packing before the election, and that they would find out afterwards. Then, at an ABC News town hall earlier this month, Biden suggested that he would provide an answer by Election Day.

On Monday, Biden confirmed to reporters in Chester, Pennsylvania, that he would create a bipartisan commission to study reforms to the judiciary, and that it would report to him within 180 days of his taking office in January.

A reporter asked Biden specifically about whether he would support term limits for Supreme Court justices.

Biden told the press that he was against term limits, but that he was considering a proposal to move Supreme Court justices to different courts:

No, no no no no. There is a question about whether or not — it’s a lifetime appointment. I’m not going to attempt to change that at all. There’s some literature, among constitutional scholars, about the possibility of going from one court to another court, not just always staying the whole time on the Supreme Court. But i have made no judgment, my word, my word is I have made no judgment, they’re just just a group of serious constitutional scholars, have a number of ideas how we should proceed from this point on. And that’s what we’re going to be doing. I’m going to give them 180 days, God willing, if I’m elected from the time I’m sworn in, to be able to make such a recommendation.

The problem: the two proposals are the same. That is, the proposal to move justices “from one court to another” is a proposal for term limits on the Supreme Court.

They are part of the same plan, contained in the same legislation that Kaufman has endorsed.

As Breitbart News reported last month, the new legislation, backed by Rep. Ro Khanna (D-CA) and other left-wing members of Congress, “H.R. 8424: Supreme Court Term Limits and Regular Appointments Act of 2020,” proposes that Supreme Court justices be forced to retire after 18 years and then relegated to a “senior” role or moved to other courts.

The reason for rotating the justices, rather than removing them, would be to avoid the necessity of passing an amendment to the Constitution, which indicates that federal judges serve for life (or until retirement or impeachment).

As Reuters explained in reporting on the bill last month: “The bill seeks to avoid constitutional concerns by exempting current justices from the 18-year rule. Those appointed under term limits would become “senior” upon retirement and rotate to lower courts.”

Biden made his remarks just hours before Republicans were set to confirm Amy Coney Barrett to the Supreme Court, creating a nominal 6-3 conservative majority.