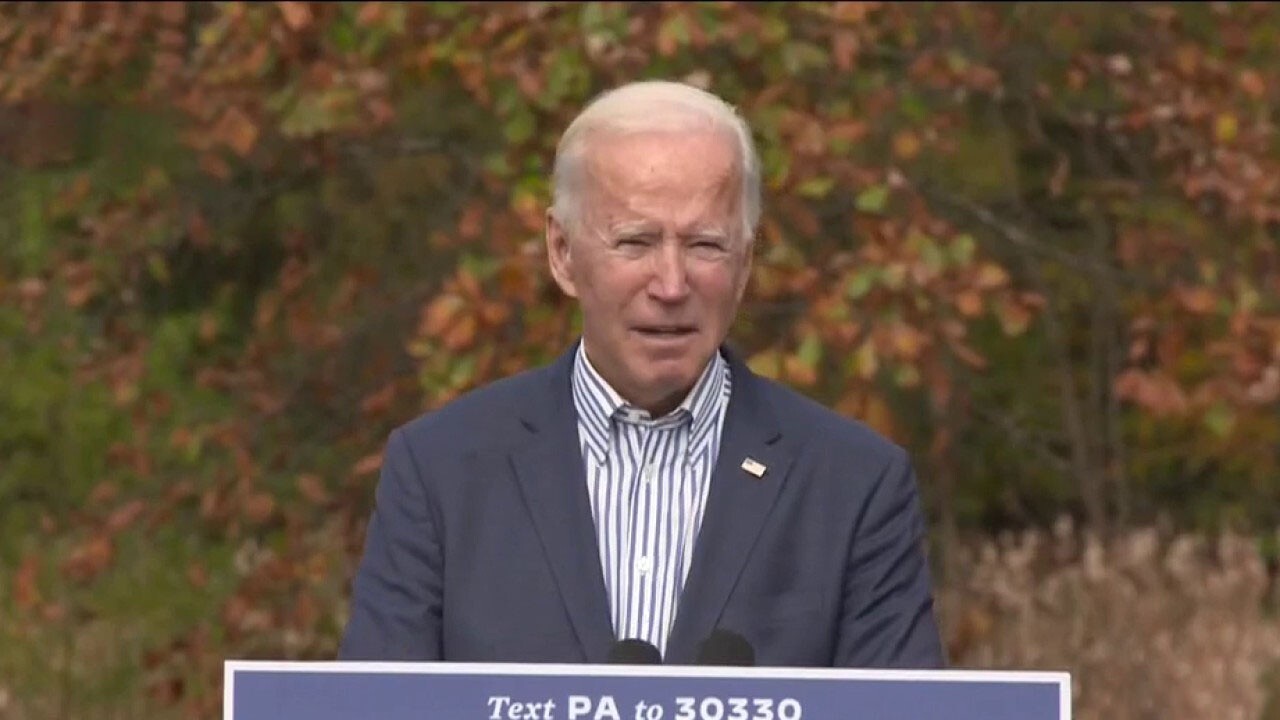 Welcome to the final week of one of the most vengeful and acrimonious elections in our country’s history. Very soon we will know whether Establishment Elites have succeeded in defeating a president who broke some glass in order to make our country great again.

We will also know whether the campaign went on one week too long for Democratic presidential candidate Joe Biden.

New revelations that Biden apparently lied when he claimed no knowledge of his son Hunter’s shady business dealings in China, Ukraine, Kazakhstan and elsewhere and that the candidate may in fact have been entangled in those activities, has rocked the campaign.

Biden said recently: “Our characters are on the ballot; look at us closely.” Perhaps he should add: “But not too closely.”

A poor debate performance Thursday hurt Biden as well. Biden stumbled several times, and also admitted that he wanted to “close down the oil industry.”

That was an awkward pronouncement to make on nationwide TV for a candidate who needs to win the energy-producing state of Pennsylvania. The candidate later tried to walk back his statement but, like earlier promises to end fracking, the damage was done.

It should not surprise voters; you cannot get to Biden’s stated goal of net zero emissions in the next 30 years without dismantling our wonderfully inexpensive and reliable energy infrastructure, and jettisoning oil and gas.

Though Biden leads in national polls by on average 8 points, according to Real Clear Politics, his advantage is slipping both nationally and in certain critical swing states.

Who can be surprised? He has carried out the most pitiful non-campaign ever, refusing important interviews and hiding out in his basement.

Biden’s campaign team thinks he has the race in the bag and is taking no chances. His strategists do not trust Biden to survive normal encounters with reporters and have wanted this to be an issue-free race, hoping to make it entirely a referendum on President Trump’s personality and handling of the coronavirus.

They’re afraid the more Americans see of Biden, the more they may worry about his mental acuity, or dislike his increasingly left-leaning policies.

His damaging debate miscue on oil came in spite of Biden spending several days in seclusion, ostensibly prepping for that confrontation. Such a “time out” is almost unimaginable in the final stretch of a presidential race, when millions of undecided voters make up their minds.

The disappearing act was no study break; it was in response to accusations that the candidate might have been party to his son Hunter’s efforts to cash in on Biden’s White House position in China and Ukraine. The liberal press tried to squash the story; some dismissed it as “Russian disinformation.”

But laptops and cell phones and other evidence support the allegations, while the Director of National Intelligence John Ratcliffe has said there is no indication that Russia is behind the story.

Efforts by Twitter and Facebook to suppress it backfired and caused the scandal to circulate widely. Rather than defiantly rebut the story, Biden went underground. That was unwise.

Trump, meanwhile, fresh off his bout with the coronavirus, is energetically crisscrossing the country and reminding voters that before the arrival of COVID-19 from Wuhan, our country was in terrific shape. He is promising that, given the chance, he will restore the record-low unemployment, rising wages and increased opportunities that were benefitting all Americans as recently as January.

With 56% of Americans telling Gallup they are better off than they were four years ago, and that, for most, the economy is their number one issue, it’s a powerful argument.

And Trump, just as in 2016, is making it powerfully. His rallies draw crowds even in this COVID era; the enthusiasm is undeniable and a stark contrast with the feeble campaign events being hosted by Joe Biden and his surrogates.

At his infrequent in-person gatherings, Biden typically takes no questions, does not chat with his pool reporters and reads from a teleprompter to a handful of socially-distanced attendees.

Even President Obama has failed to drum up crowds. Speaking recently in Florida, the former president attracted only 228 cars and some 400 people, according to pool reports. It wouldn’t be surprising to see Obama quit the trail; such outings are an embarrassment.

Trump needs his rallies. He is fighting not only Biden, but also the liberal media and also social media, which wants voters to believe that the election is over.

Headlines highlight unfavorable polls, that more than 60 million Americans have already voted, and that in some states, early voting by Democrats outweighs that of Republicans. Those accounts ignore widespread expectations that Democrat voters were more likely to vote early and that there are still nearly one hundred million votes to be cast.

Biden backers, which includes most media outlets, want to depress turnout by Republicans by portraying Trump’s cause as hopeless.

To be sure, Trump looks to be behind in some of the key swing states, like Pennsylvania and Michigan.

But we have been here before. In 2016 an AP-GfK poll showed Democrat Hillary Clinton 14 points ahead at this same time in the race. That was not an outlier. Nearly all the polls showed Clinton winning by a good margin.

In retrospect, pollsters noted the “shy Trump voter” effect – the notion that not all supporters of the president were open about whom they would vote for. Some analysts argue that there are even more “shy” Trumpsters today; after all, backing the president is far more controversial and even dangerous than it was 4 years ago.

In 2016, Americans watching the giant turnout of Trump enthusiasts at rally after rally began to question the unfavorable polls.

Perhaps they should be doing the same today.

Can Trump pull it off? It is possible. If Trump wins, Democrats will rue their Hidin’ Biden strategy; they will also wish the calendar had had one fewer week.