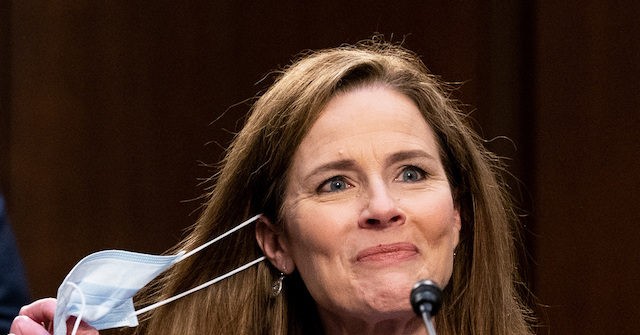 The Senate voted to confirm Judge Amy Coney Barrett to the Supreme Court on Monday night, making her the third justice to join the nation’s highest court under President Donald Trump.

Barrett will become the third justice to join the Supreme Court since Trump took office, after a Senate Republican majority confirmed Judges Brett Kavanaugh and Neil Gorsuch to the court.

Senate Minority Leader Chuck Schumer (D-NY) said that the confirmation of Barrett “will go down as one of the darkest days in the 231-year history of the United States Senate.”

Senate Majority Leader Mitch McConnell (R-KY) announced in early October, or early during the confirmation process, that Senate Republicans had the votes to confirm Barrett.

Barrett spoke about her judicial philosophy and her qualifications for the Supreme Court without using any notes, which Sen. John Cornyn (R-TX) found impressive.

If that wasn’t enough to anger Democrats — who have spent this week trying to paint Barrett’s nomination process as a sham — Feinstein also thanked the committee’s chair, Sen. Lindsey O. Graham (R-S.C.), and then walked across the room to wrap him in a hug. Never mind that neither senator was wearing a face mask. Many Democrats were so much more incensed about what that hug symbolized — a final white flag, a compliment for Graham after a comparatively tame week of questioning — that, hours later, at least two liberal activist groups called for Feinstein to go.

Brian Fallon, the executive director of Demand Justice, said, “It’s time for Senator Feinstein to step down from her leadership position on the Senate Judiciary Committee. If she won’t, her colleagues need to intervene.”

Schumer said he had a “long and serious talk” with Feinstein regarding handling the confirmation hearings.

The Democrats’ inability to slow down Barrett’s confirmation might result from polling, which found that a majority of Americans want Barrett confirmed to the nation’s highest court.

It may explain why Schumer also led a largely symbolic effort to convince Republicans to vote against Barrett on Friday in a brief but rare closed-door session.

Murphy claimed on Sunday that the battle to confirm Barrett is a “fight to the end. No hyperbole – it’s life or death stakes.”

Despite Democrats’ tepid opposition to Barrett’s confirmation, the Senate approved her on Monday night. Now, Supreme Court Justice Clarence Thomas will swear in Barrett to the nation’s highest court at the White House on Monday evening.