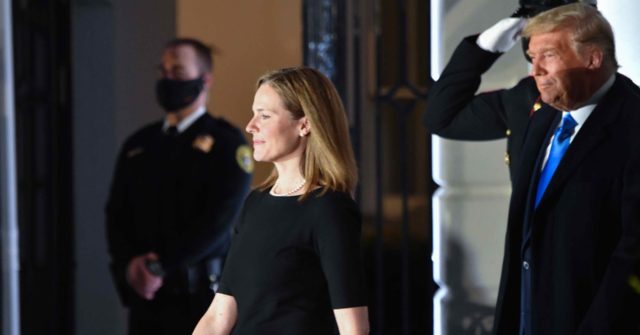 The Supreme Court could soon revisit a challenge to a Pennsylvania Supreme Court decision on extending the deadline for the receipt of absentee ballots — this time, with Justice Amy Coney Barrett on the Court, possibly casting a tie breaking vote.

The U.S. Supreme Court rejected a Republican application to stay the decision of the Pennsylvania Supreme Court to grant the Democratic Party’s request to make several changes to mail-in voting that critics have decried as vulnerable to fraud.

As Breitbart News reported last month, “The Pennsylvania Supreme Court ruled … that ballots received three days after Election Day will still be counted — even if there is no evidence they were postmarked on time.”

The Supreme Court, however, split 4-4 on the request, leaving the decision of the lower court in place. Chief Justice John Roberts sided with the Court’s liberal minority; the remaining four conservative justices sided with the Republican request.

The fact that the Court split 4-4 means that its decision will set no precedent on the legal issues at stake.

Moreover, Republicans have re-filed a challenge — this time, apparently, challenging the constitutionality of the power of the state courts to decide election issues. Article II, Section 1 of the Constitution states (emphasis added):

Each State shall appoint, in such Manner as the Legislature thereof may direct, a Number of Electors, equal to the whole Number of Senators and Representatives to which the State may be entitled in the Congress: but no Senator or Representative, or Person holding an Office of Trust or Profit under the United States, shall be appointed an Elector.

The Court could decide that the Pennsylvania state legislature — which is controlled by a Republican majority — has the sole power to regulate elections, invalidating the courts’ changes to the process of accepting absentee ballots.

Sen. Ted Cruz (R-TX) told Breitbart News — without referring to any particular controversy — that one of the most important reasons to confirm Barrett before the election was to avoid 4-4 splits that could create a patchwork of electoral guidelines.

Barrett will also hear a variety of other consequential cases immediately upon taking her place on the bench.