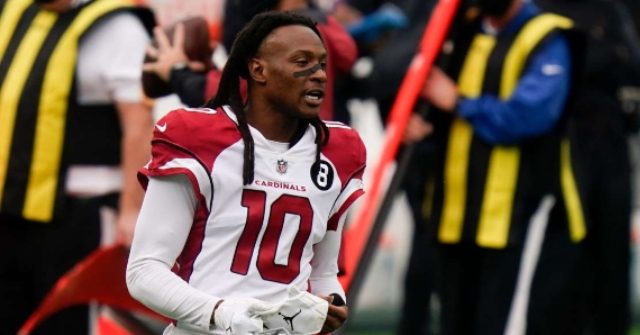 Normally DeAndre Hopkins confines all of his headline-making activity to the football field. However, on Sunday, the Cardinals star receiver made news for giving a caravan of Trump supporters the “salute.”

Images surfaced on social media showing Hopkins in his Ferrari driving near and flipping off a Trump caravan near Glendale, Arizona.

Deandre Hopkins flipped off a bunch of Trump supporters on his way to the stadium then put up 10 catches for 100 yards and a TD. Legend. pic.twitter.com/L1m2aijJfN

@DeAndreHopkins My 8 yr old son was in one of the cars you were swerving in and out of as you were disrupting the PHX Trump Train drive and trying to cause an accident. You’re a piece of trash. Make your political statements, but you out people at risk today. @espn @AZCardinals pic.twitter.com/7tAuuyM5Or

Trump supporters accused Hopkins, not just of the obscene gesture, but also of swerving in and out of the caravan and putting people in danger. Hopkins who had remained quiet about the incident, broke his silence Tuesday during the All Things Covered podcast with Patrick Peterson and Bryant McFadden.

According to Hopkins, it was the Trump supporters who were being aggressive and that’s what prompted the middle finger.

“Driving on the highway, I guess I got in between a train, or a bunch of cars, that I wasn’t supposed to be in between in my car and they were honking the horn at me to tell me to get out of their way,” Hopkins explained. “I didn’t, and the guy in front of me stepped on his brakes and he tried to stop dead in traffic and I got around him and I stuck him a birdie.

“I really was about to do a peace sign to them but this finger was kind of hurting so it ain’t make it up in time. It was like, damn dude you’re trying to step on brakes in dead traffic because I’m in your guys’ train and what not trying to go to work?”

Hopkins hasted to add that he did not drive aggressively or throw anything at the cars, as had been reported.

Hopkins accounted for over 100 yards in receiving as the Cardinals beat the Seahawks in overtime, 37-34.