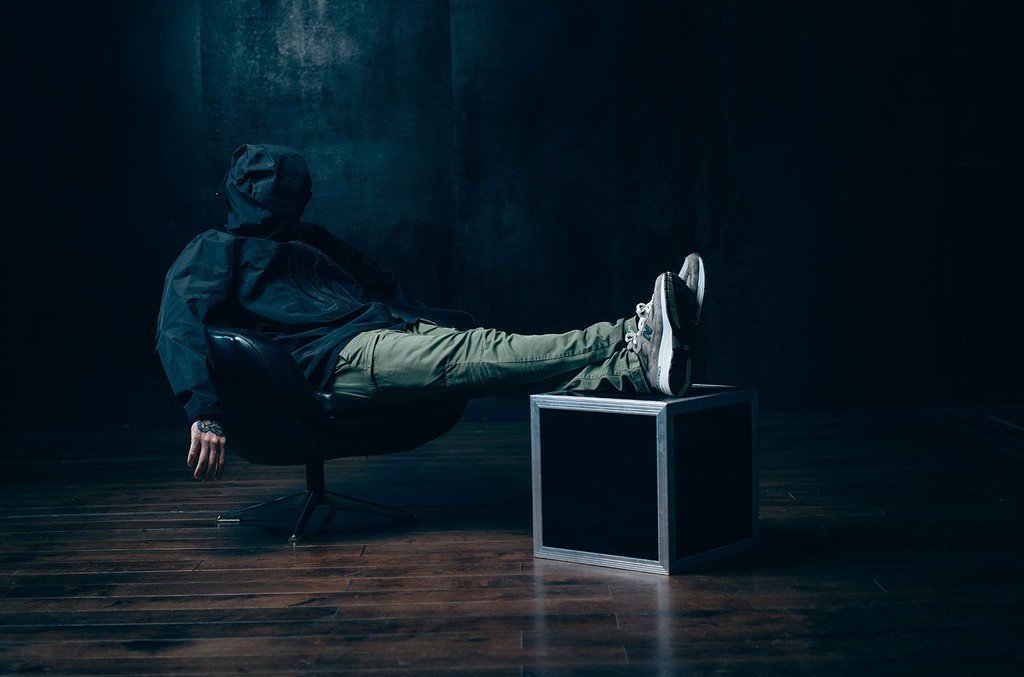 The album’s title represents the artist’s three aliases: the two times world champion DJ Troubl, UK bass/house artist Plezier and UZ. The name also represents Paris, London and Los Angeles, cities that for him symbolize each genre of music he’s produced during his two decades in the scene. But with a hefty list of accomplishments to the UZ name — festivals plays at EDC, Coachella, Ultra and more, releases on Mad Decent, Boys Noize Records and Mau5trap, etc. — he’s ready to slow down a bit while he settles into a fourth (as yet unnamed) alias.

“I have travelled around the world numerous times, played many festivals and met a lot of people during the past 20 years,” he says, “but I came to realize that my priorities are elsewhere. Sadly I have lost my father while I was touring, and to this day I regret not having been able to say goodbye…I am enjoying simple things, different things and I slowly took a turn in my artistic direction while finishing Trinity.”

Here, in his own words, the producer gives the backstory of each track on this new album.

I wrote “Monster” mid-2019 in my studio in Los Angeles. I’ve recently bought this analog synth, the Prophet 6 by Dave Smith Instruments, and I’ve never really used it in my production yet, so I started going through the sounds and came across that amazing bass that instantly caught my ear. I wrote a simple bass line and added bells to make it more infringing and cinematic. Very pleased with the result, I moved on with the beat that pretty much wrote itself, I loved the slow tempo allowing me to incorporate a lot of details and percussion sounds.

I first fell in love with hip-hop in the ’90s. It was important for me to represent all my influences on Trinity, so I produced a lot of rap beats during the writing process. I wrote the beat and sent it to Solosam. We’ve worked with him for a project on Quality Goods Records a few years back and it was overdue that we worked on a song together. This was the perfect beat for him, and he recorded and sent back the demo very quickly. I was stoked.

The writing process on this one is pretty similar to “Monster.” I started messing around with the Prophet 6 and came across that amazing arpeggiated sound which became the backbone of the intro. It had a Sam Gellaitry feel to it and I decided to keep going in that direction. I sampled a single note from the Prophet and played with it in Ableton, which is a technique I would typically use in my other project, PLEZIER. It does sound different from a typical dark UZ song but it was important to me that I show my complete sound palette on Trinity, using all my techniques and influences.

It’s one of those tracks that you start and think, “This isn’t going anywhere,” and ends up being one of my favorite from the album! I started it at my mum’s place, in a very small city where there was nothing for me to do that day but work on music. I slept on the demo for at least a year before going back to it.

I went on Twitter and asked people to recommend me a rapper [for this track] and Twnty8 was recommended to me. I was vibing with his music, so I sent him the beat. I got the recording a few days later, and it was perfect. The production and recording was quick and efficient, and we got to make a video for it in Joshua Tree. We booked an Airstream and spent the day filming in the desert, until the night settled and we got to enjoy the beauty of the night sky.

I just finished my second sample pack for Splice, and I was experimenting with sounds. I quickly came up with the main loop from the track. I forgot about it, but really liked the demo and decided to experiment with different sounds and make a second part. I was inspired by bass sounds used by French artists like Justice or Sebastian, very raw and distorted, so I created a bunch of different sounds and ran them in different type of amps. When the whole structure of the song was done I went back to my roots and recorded a scratch verse using lyrics from an old songs of mine. We filmed the video in Hollywood and Japanese Village Plaza in Los Angeles, and got super creative with the FX and editing under my supervision.

I was still messing around with 8-bit sounds in my studio and I came up with that incredible beat. I haven’t heard anything similar to this one. U.K. friend Snowy, who was featured on previous projects on Quality Goods Records, is an amazing artist and I’ve been a long time fan of his work, so it was only natural I sent him the beat. He recorded the track and I was speechless with the final results. Definitely one of my favorites from Trinity.

Bishu, who’s also an artist we released on Quality Goods Records, sent me the track one day. Great singing and rapping, awesome production and the “drop” was just out of this world. I had never heard something like this, and I instantly jumped on the collab. I mainly cleaned everything and added a second drop in that infamous UZ style, ominous brass hit, menacing pizzicato melodies and most importantly, fat bass sounds. The contrast between the melodic vocal and the “drop” is perfect.

I started “Danger” approximately two years ago — the first version had a melodic intro, and I wanted to get a female singer on it but after listening to it repeatedly I thought it just needed to be a raw, heavy track. It went to quite a few stages before I was thrilled with the results. I then worked on a second part that I wanted more wobbly without it sounding dubstep, so I focused on making the melody simpler and adding an LFO on the 808 adding some rawness to the song. It is a pretty short song, but it is concentrated in emotions.

Always experimenting with sounds, I came up with a simple melody and started putting scratching FX on it. Being a DJ myself, and a two time World Champion turntablist, I often incorporate very discreet scratching effects on melodies. I kept the beat simple on this one. It’s important to space things out to leave room for the vocals.

Holly is one of the nicest people I have met in Los Angeles: he often came to the studio where we would make track after track and “Rockstar” came out of one of those sessions. We would plug both our computer and sync the BPM and just jam for hours. He started writing the melodic loop, and I came up with the beat pretty quickly. Holly played the track to Rikkdarulah $K, he loved it and recorded the vocals without delay.

I literally have hundreds of tracks in my archives that I sometimes pull out and listen to. This was one of them. It was different from what I am known for as UZ, but still has that obscure vibe. It didn’t have that obvious 808, so I experimented to give it a “wave” feel. For years, artists like Plastician have helped push the U.K. wave sound and make it more popular.

I always felt wave was trap’s cousin, so it was normal for me to ask Brothel for a collab. I love his sound and I kept seeing him mentioned online. It was quite a complex process, because we use totally different DAWs and there was plenty of stems and sounds to sort out in the final project, but it was totally worth it. He took it to the next level and the final result is a great example of two artists becoming one through a song.

I consider Hucci a pioneer in the trap genre, as well as his brother Ozzie and similar artists such as Stööki Sound. “European” trap was minimal, tribal and bass heavy and it paved the way for what was to come.

Hucci sent me some stems in 2019, and I instantly accepted the challenge. There were two ideas. It wasn’t much, but it had that instantaneously recognizable sound that no one has been able to reproduce yet. The inspiration was flowing and I built the track around the stems and came up with a very satisfying result. We tried having rappers on it, but it didn’t feel right and it was taking the attention away from a very anticipated trap collaboration.

“No Trust” is a very melody-driven track, not what I am known for but Trinity is my way of opening up to my fans musically.  The beat-writing process is pretty much always the same in my case: I start with the melody and chords, layer a few more elements, then write the beat and finish with the bass. I know this is a pretty unique way to create music, but it has always worked for me. Worst-case scenario, the bass note is too low and I just have to transpose all the elements in a key where the bass sounds better.

“Trinity” is the essence of what I have been until now as an artist. It mixes all my influences, all the different techniques and skills I have learned or the past 20 years. It is a track that wouldn’t work by itself, but makes perfect sense closing this eponym album. It’s opening a door and allowing me to hatch into an accomplished artist. It doesn’t mean I am only going to make music similar to this, but I am breaking the invisible boundaries I have put myself into with the UZ alias. It is just the beginning for me.