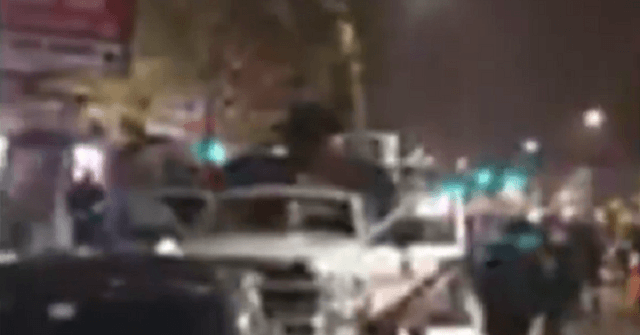 Rioters in Philadelphia begin looting and vandalizing random vehicles Monday night. The riots followed the shooting of an armed Black man who chased officers with a knife.

Protests are turning violent in multiple parts of the city after two police officers were forced to defend themselves from a man wielding a knife during a domestic situation, Breitbart News reported.

Video tweeted from Philadelphia shows people on the streets of Philadelphia breaking into vehicles and vandalizing property.

#Philadelphia
Rioters vandalize and steal from random vehicles parked on the city street, including a work truck loaded with an excavator. pic.twitter.com/lJh4FwQX03

#Philadelphia
A ‘Sun Ray’ store is looted as rioters set off fireworks in the street. pic.twitter.com/xx3w6xtyiB

Earlier reports showed rioters attacking a police line with shields up who have been attacked with buckets of paint, wooden pallets, bricks, and other objects.

What the fuck. It looks like they’re throwing bricks at the police. I can’t tell for sure. #Philly pic.twitter.com/Bd1KYLPXbP

Looters are seen running away with as much as they can carry from stores in West Philadelphia.

#Philadelphia
Wow..
People are just grabbing whatever they can get their hands on from this local store.

No police visible in the immediate area. They broke through a roll up door to gain access.

Protests are turning violent in multiple parts of the City of Brotherly Love after two police officers were forced to defend themselves from a man wielding a knife during a domestic situation, Breitbart News reported.