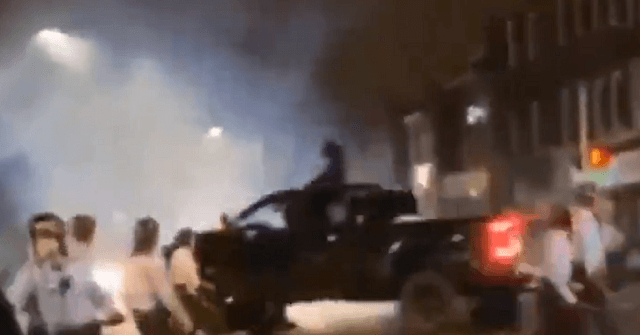 A large black pickup truck reportedly drove through a police line in Philadelphia during protests Monday night. A witness reported the truck ran over a female officer.

A video posted on Twitter Monday night shows a police line attempting to block off a street from protesters. Suddenly, a large black pickup truck with someone standing up in the bed of the truck rounds the corner and plows through the police line. An officer can be seen laying on the ground as the truck drives away.

BREAKING: A large black pick-up truck drove through a riot line of Philadelphia police officers, and from reports at least one officer is down. pic.twitter.com/Pu5l1iiuGH

The woman appears to be dismayed at the apparently intentional running down of a police officer on the streets of Philadelphia.

“They ran that lady right over,” the woman said.

The driver sped away from the scene after running through the police line.

Journalist Shane B. Murphy tweeted a report that officers stopped the driver of the black truck suspected of running over the police officer and placed the driver in custody.

#Philadelphia
BREAKING:
The black pick-up truck that struck the officers has been stopped by police and the driver is in custody. Police are holding the vehicle for investigation.

Unknown status on the injured officers, or the exact number of officers struck.

“Unknown status on the injured officers, or the exact number of officers struck,” he reported.

Protests turned violent in multiple parts of the city after two police officers were forced to defend themselves from a man wielding a knife during a domestic situation, Breitbart News reported.