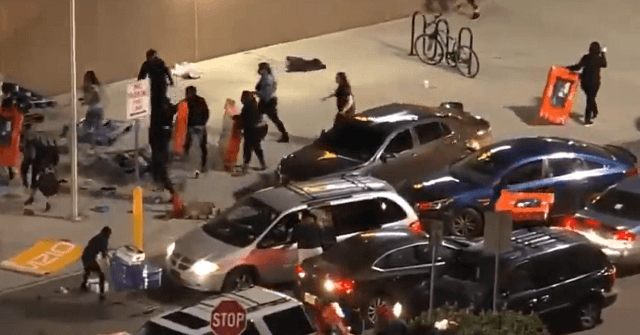 Looters in Philadelphia protesting the shooting of an armed Black man by police turned to pillaging a Walmart store and stealing big-screen televisions.

Multiple videos shot from the vantage point of news helicopters show looters ransacking a Philadelphia Walmart store. The parking lot is littered with big-screen TV boxes discarded after loading the units into their vehicles.

More looting at Walmart in Philadelphia, PA. They’re running amok. Looks like some TVs for their hungry children. There literally is bread there, and I don’t see anybody with a loaf. #Philly pic.twitter.com/ZZ2OQvfNl8

Another view shows someone attempting to drive off with a large-screen TV on top of the car. The box slides off and is dumped in the parking lot. Another vehicle appears to drive over another TV box.

This needs some Bennie Hill music. This is an absolute shit show. They don’t even care if they leave with the merch they just stole, cars are crashing into each other. What the ever living fuck. Philadelphia, PA #Philly pic.twitter.com/mXpOwkG3PK

Reports of upwards of 100 individuals that have just gained access to a Walmart and are looting.

The looting comes during the second night of protests in Philadelphia over the shooting death of an armed Black man by two police officers.

Walmart, five below and multiple other stores targeted pic.twitter.com/gbn9eMVvzk

During the first night, rioters injured 30 police officers leaving one in the hospital with a  broken leg.

Police make more than 90 arrests during the first night’s melee.