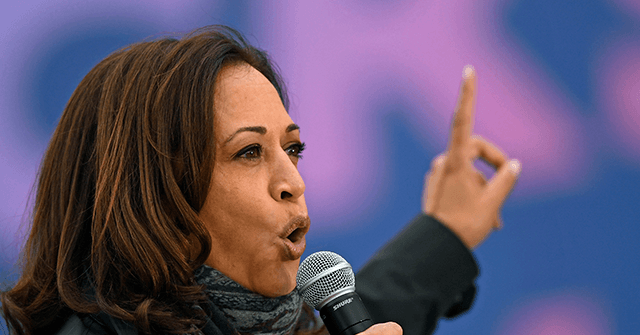 Sen. Kamala Harris (D-CA) told voters in Tucson, Arizona, that she and Joe Biden were fighting for a “long-overdue reckoning on racial injustice in America.”

Harris was speaking at a “drive-in rally,” the first of two stops for her in the Grand Canyon State. Democrats have long hoped to swing the state into the “blue” column.

Both Harris and Biden have emphasized the idea that the United States is haunted by “systemic racism.”

She spoke in the aftermath of a second night of violence and looting in Philadelphia, Pennsylvania, following the shooting of an armed black man, Walter Wallace Jr., by police.

We are in the midst of a crisis, which is the long-overdue reckoning on racial injustice in America.

On that note, Joe Biden knows Americans’ history. He knows our history as a country. And he has the courage to speak truth about it. Joe Biden has the ability to say, “Black Lives Matter.”

Donald Trump will never speak those words [sic]. Joe Biden knows that we need to look at racial disparities in America. We need to understand Latinos and African-Americans have been three times more likely to contract COVID and twice as likely to die from it. Joe Biden knows our indigenous brothers and sisters have the highest rate of diabetes of any population in America. Joe Biden says pay attention to this and understand, a real leader will address the truth and speak the truth in a way that is about promoting equality and equity.

Though Harris and Biden criticized violence and looting earlier in the week, Harris did not mention it in Tucson.

Trump has, in fact, said the words “Black Lives Matter”:

That’s a lie. Roll the tape!pic.twitter.com/v6vLphvK8f

Harris repeated a number of other racial hoaxes, which Breitbart News has debunked on many occasions.