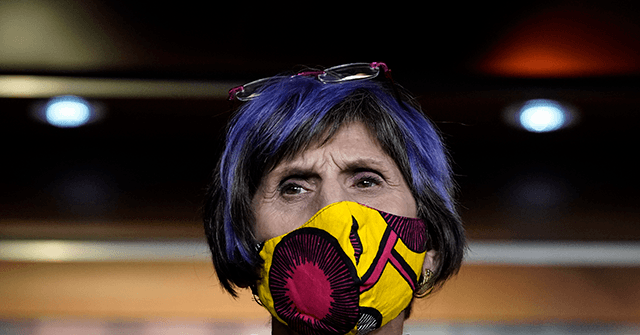 “We have a representative in office who has fundamentally failed to reach across the aisle and has voted 100% of the time with Nancy Pelosi this cycle,” Streicker said during a debate Thursday hosted by WTNH-TV, the Hartford Courant reported. “It’s not OK that the voices of Connecticut are not being heard.”

Streicker, a wealthy real estate developer, has invested a total of $1.6 million in her campaign to unseat DeLauro in the state’s 3rd district, reported the CT Mirror.

Her campaign website states that, among her priorities, is the fact that Connecticut “pays the 4th highest property taxes and 2nd highest combined sales and income taxes in the nation.”

“The national economy is booming yet we still don’t see the growth here at home,” the campaign adds.

“We have some of the highest taxes in the country,” Sullivan told Breitbart News in September about the problems associated with years of a Democrat-led legislature in Connecticut. “We were not enjoying any of the prosperity that so much of the country was having prior to the pandemic.”

When we talk about the unintended consequences of the pandemic… achievement gaps, mental health and social network breakdown for our youth means this pandemic may last some a lifetime… #masksforCT & getting back safely & swiftly https://t.co/5uxMDmTPla

As CT Mirror observed, Streicker’s aggressive ad campaign against DeLauro has suggested the congresswoman is “guilty of corruption for allowing Rahm Emanuel, President Barack Obama’s former chief of staff, to live in the basement of her Capitol Hill home rent-free.”

The ad continues that DeLauro’s relationship with Emanuel was helpful to her husband, Democrat pollster Stanley Greenberg, in obtaining government contracts.

Meanwhile, the Democrat Party in Connecticut and the Working Families Party have joined together to attack Streicker’s real estate dealings, accusing her in one ad of being a “New York slumlord.”

In another ad, President Donald Trump is seen transforming into Streicker.

“We already know what happens when a multimillionaire landlord who made their money cheating people gets elected, and we don’t need it in Congress,” the ad states.

As Breitbart News reported, Streicker spoke at a rally in support of Trump in North Haven Sunday.

“Change is coming…get out there and vote,” she told the hundreds who gathered. “Change is happening, and November 3 is going to be monumental.”