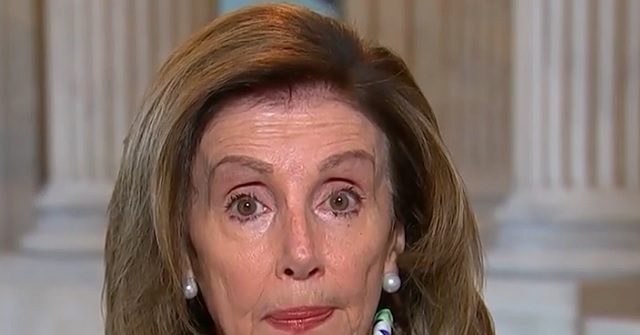 House Speaker Nancy Pelosi (D-CA) on Wednesday called on President Donald Trump to “stand up like a man” and accept the upcoming election results.

With Trump saying he wants to know the results of the election on election night rather than states still counting votes days later, Pelosi told “MSNBC Live” she hoped Trump would “accept the results of an election of the American people.” Pelosi argued that Trump is being critical of the delay in naming the election winner “just to gin up his base so that he can save face when he suffers a defeat that is coming toward him.”

“On January 20, 2021, Joe Biden will be inaugurated President of the United States,” Pelosi declared. “The states will count the votes that they have in a timely fashion. And again, if the president wins in that format, then so be it, then he’s president. We don’t anticipate that that will be the case, and neither does he. And that’s why he’s trying to, as I say, stir the pot so that people will think that he really won when he didn’t. Of all of the things that the president has done, and they have been horrible, undermining the Constitution, degrading our environment, denigrating who we are as a people, undervaluing who we are in terms of our priorities as a country, taking children out of the arms of their parents, again, dimming the bright light that we are of hope to the world, of all of the things, the very idea, and again, ignoring that nearly 250,000 people have died from a virus that many of whom could have been saved, the list goes on and on.”

She continued, “[T]he easiest thing for him to do is to stand up like a man and accept the results of an election of the American people. For him to make these kinds of statements shows his lack of patriotism, his undermining of our elections. While he allows foreign countries like his friend Putin to undermine the integrity of our election. He himself is doing it as well. But let’s forget about him. Let’s get on with the future. Let’s have the results counted properly, that everybody’s vote is counted as cast. Let’s unify the country as we go forward. Joe Biden is a great unifier.”