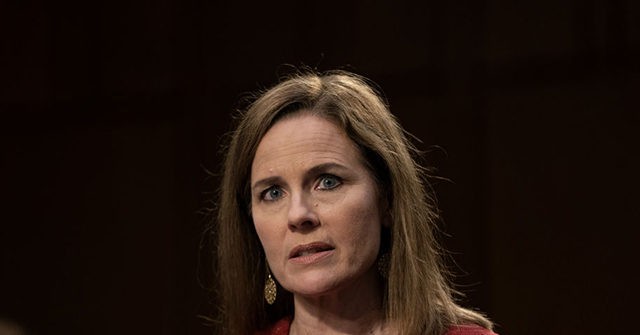 Less than one day after Amy Coney Barrett was confirmed as an associate justice on the U.S. Supreme Court, an elections board in Pennsylvania filed a motion with the court on Tuesday asking that Barrett recuse herself from a voting case that could impact the 2020 general election.

The filing focuses on “the circumstances of [Barrett’s] nomination and confirmation” to argue that her “impartiality might reasonably be questioned,” which is the federal statutory standard for judicial recusal. The Luzerne County Board of Elections also argues that the U.S. Constitution’s Due Process Clause “requires [Barrett’s] recusal under these same circumstances.”

Those circumstances are: (1) the swift nature in which the newest high court justice was nominated and confirmed; juxtaposed with (2) the basic issue of taking any action on the case itself–a question the Supreme Court already dispensed with earlier this month.

Recall: the Pennsylvania Supreme Court ruled in late September that local elections officials must accept ballots that are postmarked by November 3 so long as they arrive on November 6. If ballot envelopes lack a postmark, or if the postmark is illegible, election officials must accept such ballots ballots as valid unless a “preponderance of evidence” proves otherwise.

The report said that Pennsylvania Republicans have been trying to fight the “lax interpretation of Pennsylvania’s ballot deadlines” but have lost so far, even when they appealed directly to the Supreme Court and Chief Justice John Roberts sided with the liberal judges to deny the GOP’s emergency application.

“Last Friday, with Barrett’s by-then-assured Supreme Court confirmation just a matter of time, the state GOP tried their luck again by filing an expedited petition for a writ of certiorari in the case stylized as Republican Party of Pennsylvania v. Boockvar,” Law & Crime reported.

“The nomination and confirmation of a Supreme Court justice this close to a presidential election is unprecedented,” the recusal motion said. “As concerning as that is, what is even more troubling is the language President [Donald] Trump has used in consideration of this nomination, linking it directly to the electoral season at hand, with implications for his own re-election.”

“The present case is one of utmost important to the President’s re-election bid,” the motion said. “Just as President Trump has placed Justice Barrett on the Supreme Court with whatever hope or expectation he may have, he has also imposed on her the duty to recuse herself in this case. Her integrity and the integrity of this Court cannot tolerate any other choice.”

Fox News reported on the political angle on voting in this year’s general election:

Democrats argued that the flood of absentee ballots and other challenges posed by the coronavirus pandemic makes it necessary to extend the period in which ballots can be counted. Wisconsin is one of the nation’s hot spots for COVID-19, with hospitals treating a record high number of patients with the disease. It is also a crucial battleground state that Trump won by less than a percentage point in 2016.

Republicans had opposed extending the Nov. 3 deadline, saying that voters have plenty of opportunities to cast their ballots by the close of polls on Election Day and that the rules should not be changed so close to the election.

The U.S. Postal Service and several counties in battleground states urged voters to mail in their ballots by Tuesday, Oct. 27– exactly seven days before the election — to give ample time for delivery.