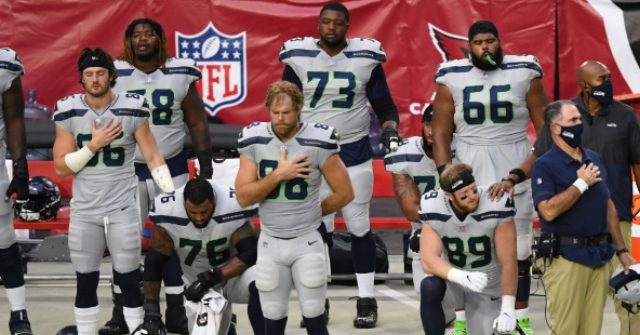 The NFL may be beginning to show signs of a ratings rebound for its daytime windows, however, primetime is still in the midst of a massive decline.

The Week 7 edition of Sunday Night Football featured the Seahawks and the Cardinals, an exciting contest between two of the most exciting teams in the league. Though, the contest only averaged a 7.9 rating and 14.31 million viewers. That figure represents a 35 percent decline from last year’s Week 7 matchup between the Cowboys and the Eagles(12.2), and a 33 percent decline in viewership (21.45 million).

While it should be considered that SNF did go against Game 5 of the World Series, the decline is still troubling. As Sports Media Watch reports, “Keep in mind last year’s head-to-head between SNF and the World Series took place in Week 8. Compared to that game — Packers-Chiefs — ratings still fell 24% (from 10.4) and viewership 22% (from 18.32M).”

So, this year, SNF actually fell even more compared to last year.

Monday Night Football has fared better, but is still seeing declines. Monday’s Bears-Rams matchup fell 3 percent from last year. Not anywhere near as big a drop-off as SNF, but still concerning that a game between two good teams from the nation’s second and third largest television markets couldn’t reverse the trend of four consecutive weeks of declining ratings.

Why have the primetime games suffered why the daytime widows appear to fare much better? The answer likely comes down to options. The exploding, record-setting numbers on primetime cable news networks suggests that people are far more intrigued by politics than sports.