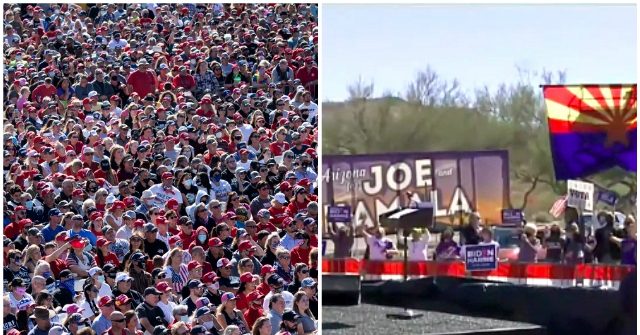 In contrast, Harris held a “drive-in” rally at Pima Community College in Tucson, Arizona, that drew “approximately 100 cars,” according to the paper.

Far fewer cars were heard honking during the Harris drive-in event, which was held in a parking lot of the college.

One livestream by ABC15 showed about 50 cars in the parking lot at the end, in addition to the approximately 10 cars seen closest to the stage. It was not clear if all cars in the lot were attendees of the event.

At the end of the rally, about 30 people left their vehicles and gathered around the stage.

Harris told reporters when she arrived in Arizona that she was campaigning “in a way” that didn’t risk voters’ safety.

“Joe and I have been clear from the beginning. We are gonna talk with voters, but do it in a way that we don’t risk their safety and their health. And so I would caution anyone who is trying to talk to folks to think about the health and well-being of the people they’re speaking with,” she said.

The Bullhead City event was only the first of Trump’s events in Arizona. He next headed to Goodyear Airport in Phoenix, Arizona, while Harris was also headed to Phoenix but expected to do small, invite-only events.

People reportedly began lining up at the Goodyear event before Trump even arrived in Bullhead City. The Arizona Republic’s David Wallace said there were “well over a thousand people in line to get in.” The paper reported that there was a “sea of red.”

I’m covering Trump’s rally at Phoenix Goodyear Airport this afternoon. There are already well over a thousand people in line to get in. #TrumpInAZ @azcentral pic.twitter.com/KF8U5B9Hob