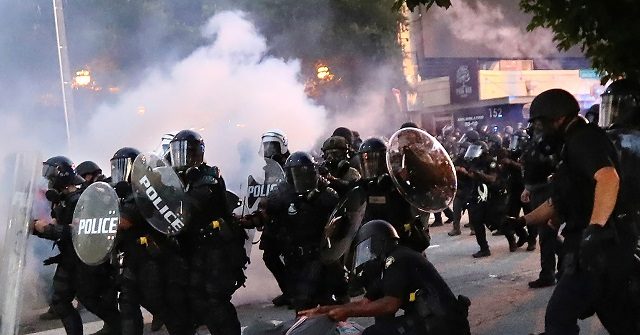 Police officers in Washington, D.C. were forced to use tear gas and flashbangs in an attempt to get control of protesters. Protesters became violent while damaging police cars and attempting to loot a local Walmart.

Large groups of protesters gathered around various parts of DC to demonstrate against the death of 20-year-old Karon Hylton. The young man died in a moped crash while fleeing from the police. On Friday, police officers spotted Hylton riding an electric scooter without a helmet and tried to pull him over, the CBS affiliate WUSA9 reported. Rather than stop, Hylton fled down an alley and crashed into a passing vehicle. Demonstrators claim that a police vehicle struck him instead.

As protester marched down the streets, they began to turn violent and began vandalizing police cars.

This is the ⁦@DCPoliceDept⁩ car that protesters attacked, smashing windows with a rock and a trash can. Several ppl who grew up with Koran described a pattern of harassment from local police, and his death seemed to flip open years of simmering resentment #dcprotests pic.twitter.com/EQxr69B2Cw

Protesters then tried to loot a local Walmart only to be met with a heavy police presence.

Moment a Walmart was looted in Washington DC ( @rawsmedia) pic.twitter.com/xnuo5o8kAx

As the demonstrations escalated, DC Police began using tear gas and flashbangs in an attempt to control the crowds.

Activists documenting the protests themselves also captured the sound of the flashbangs going off. (sound at 50-second marker)