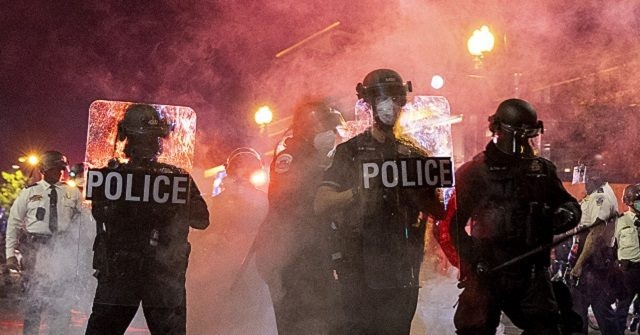 Rioters in Washington, D.C., injured 14 police officers in the chaos that ensued during the city’s second night of protests over the death of Karon Hylton. The injuries include one officer losing eyesight after being targeted with a laser.

DC Metropolitan Police Chief Peter Newsham told reporters on Thursday that 14 of his officers sustained injuries during overnight protests, according to a tweet from Associated Press reporter Mike Balsamo. The injures included eight officers being struck by incendiary devices, one eye injury from a laser, four struck by rocks or bricks, and one sprained ankle, the chief stated.

DC Police Chief Peter Newsham said 14 officers were injured last night in the protests over the death of Karon Hylton, including eight struck by an “incendiary device.” Four were hit by rocks/ bricks, one injured by a laser in the eye & one sprained ankle. Eight arrests were made pic.twitter.com/RArExchEco

The DC Police Union responded detailed the injuries and said that one officer lost eyesight due to laser exposure and multiple officers suffered blown eardrums and blast injuries from fireworks thrown at officers by rioters.

#DC
Footage from before. A large firework is thrown at the police, maybe even injuring one officer.

The police union officials said rioters attempted to overrun the station and shot fireworks at the officers and the station. They explained that 12 officers had to be taken to local hospitals for treatment.

Actions by city and police leadership forced MPD officers to “handle these violent disturbances in a passive, and frankly, unsafe manner, causing serious risk and injury to our members,” DC Police Union Chairman Gregg Pemberton said in a written statement. “The city is now refusing to allow officers to wear protective helmets, allowing rioters to fire deadly explosives at officers.”

The union stated that several officers sustained concussions after being hit in the head by rocks.

Pemberton added that these decisions by city and police leadership “not only put our members at risk, they also endanger our communities by pulling the few police we have out of patrol. This exposes our neighborhoods to violence and exposes local businesses to destruction and looting.”

Another union official, Adam Shaatal, tweeted there are now “14 less officers on the street, to serve, protect & defend our DC residents and their businesses.”

@jackmurphylive @MikeBalsamo1 The conditions that members of @DCPoliceDept @DCPoliceUnion face are untenable and inexcusable. 14 officers injured is 14 less officers on the street, to serve, protect & defend our DC residents and their businesses. https://t.co/4f01tqlZbx