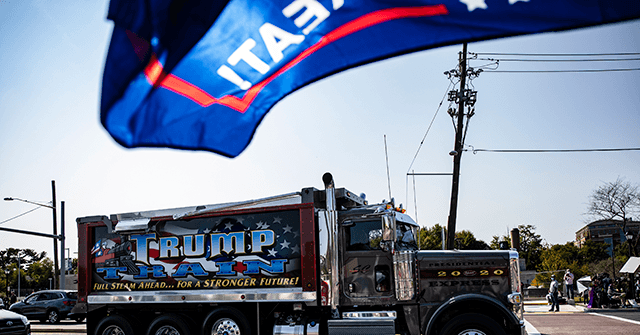 Americans are planning to join parades in several states this weekend to show their support for President Donald Trump ahead of Election Day.

A Facebook group called the Setauket Patriots will host its third “Trumpalozza” parade through Port Jefferson, New York, on Saturday, according to the Greater Long Island website.

As of Thursday afternoon, 640 people had responded to the Facebook event page.

The group described itself as a “Local Conservative Group that Supports Donald J. Trump and Conservative values. We meet weekly in Setauket.”

In Texas, the Association of Lamar County Republicans President Robert Black recently announced a second Texas-Oklahoma Trump Parade that will also take place this weekend, according to the Paris News:

Saturday’s parade will be much like the first, with participants lining up in Hugo and in Paris, with the Hugo group traveling south on Highway 271 and the Paris group heading north. Line up in Paris will be at 7 a.m. at the Lamar County Fairgrounds, 570 E. Center St., and in Hugo at the Agriplex at the corner of 5th and Rena streets. The parade will begin at 9 a.m. sharp.

“This isn’t about Trump vs Biden. The people are energized over this because this is about America! They are showing up to show their patriotism and that this country is worth fighting for!” Black told MyParisTexas.com.

Thousands of vehicles participated in the first parade that happened on October 10, the News article said.

“Anyone who wants to come out and show their support for President Trump is welcome,” she commented.

The train is scheduled to start around 2:30 p.m. outside GOP headquarters located at 515 Benjamin Way, the Citizen-News article read.

Businessman John Dashler, who is one of the organizers, said he expects over 200 vehicles to join them.

“In a Facebook post, he said more than 100 vehicles, including classic cars and motorcycles, had already signed up. Organizers say the event is also to support Blue Lives Matter, a movement to support police officers,” the newspaper reported.

Putnam also urged people to stand along the route and “Bring a flag and wave it, if you can,” she said.

In addition, a Trump Train and Back the Blue parade is scheduled to take place in Chatsworth at five p.m. on Monday, according to the Citizen-News report.

“Participants are asked to meet at the plaza at Central (the intersection of Highway 225 and Highway 52),” the article concluded.